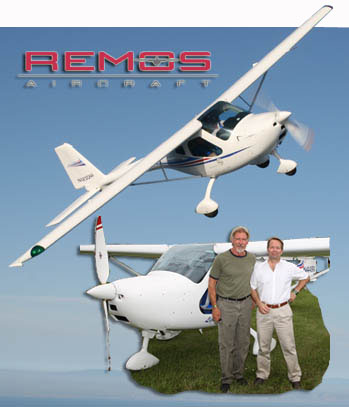 Photos depict the G-3 flying while new Remos CEO Corvin Huber poses in front of the new GX with movie star Harrison Ford. As present Chairman of the Young Eagles, Ford is active in helping kids to fly.

At EAA’s Gathering of Eagles fund raiser at AirVenure 2008, movie stars Harrison Ford, John Travolta, and Cliff Robertson plus golf legend Arnold Palmer took the stage. With their encouragement, EAA raised a ton of dough that night. Young Eagles is a great program, having flown more than 1.4 million kids. But it isn’t the organization’s only youth-in-aviation initiative *** Some 260 kids aged 12 to 18 attended summer sessions in Oshkosh this year. Programs varied, said EAA, but every student got to fly a Remos G-3 for 20 to 30 minutes. “The Remos is fun to fly and easy to control,” said Bob Campbell, Director of the Air Academy. “Students held the controls until it was time to land and were able to log the time. It’s our hope that it will be the beginning of a Sport Pilot [certificate] for each one.” *** Remos Aircraft benefits from having a dealership based right on Wittman Field, the airport that plays host to AirVenture each summer. Orion Flight Services is where I flew the new GX model for a pilot report to appear later. All I can say is…those lucky kids! *** The Air Academy programs house 48 students per session in a handsome log and stone dormitory built on the southeast corner of Pioneer Airport.