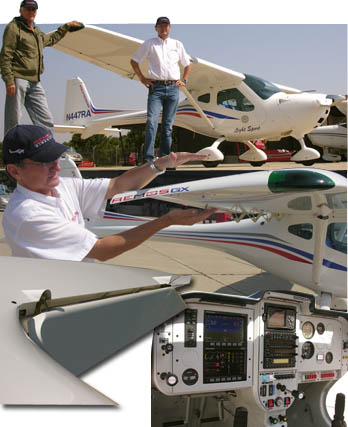 National Service Manager and longtime airshow aerobatic pilot, Cris Ferguson, uses his hands to emphasize how the GX wing has been made leaner. The lower left inset shows clean execution of flaps and linkage. At top U.S. boss Michael Meirer is pictured on the left.

Among many new aircraft shown at Oshkosh, one long-anticipated model was the updated Remos GX. The German company has moved steadily up the market share ranking of Special Light-Sport Aircraft using the earlier G-3 model designed in the 1990s. Following a major engineering effort, GX was shown to American buyers at the Wisconsin event. I was fortunate to fly the new model and found it has light and pleasant handling with several new features. *** Most notably, the wing has changed from the fabric covered version to a composite exterior that will likely be appreciated by customers including flight schools. The outer span is now tapered and the wing section is thinner, helping GX run close to the maximum speed allowed under LSA rules. GX, which is 100% built in Germany, retained the wing folding that attracts many buyers. Directional stability was enhanced by a longer “strake” or dorsal fin leading to the vertical stabilizer. Behind the left seat, the baggage area was lengthened allowing golf clubs to be carried; you remove the seat for such use, but the GX has several storage areas for small items you may want in flight. *** Also representing the GX was newly appointed Remos CEO, Corvin Huber.