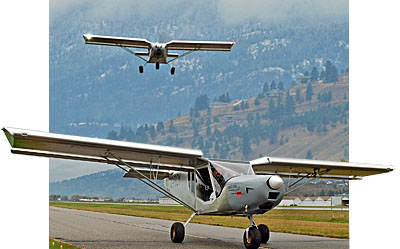 Zenith Aircraft is one of the country or world’s most successful providers of kit aircraft. Several thousands of all models are flying. One of their most popular is the “Sky Jeep,” otherwise known by the more pedestrian designation, CH 750. Plenty of reasons tell the story of why Zenith in Mexico, Missouri can sell solidly through good times and bad but arguably one of the most important is the company’s support for many different engines. Since Zenith sells Experimental Amateur Built (51%) kits, owners can install whatever they like and Zenith supports multiple engine installations. Now, they’ve added one of the very newest: Rotax BRP’s fuel injected 912iS. Zenith now offers the 912iS as an engine choice from a list of powerplants that includes the 100-hp 912 ULS, the turbo Rotax 914, the fuel-injected UL Power (video) and Viking engines, as well as the Continental 0-200 and the Lycoming 0-235/233 engines. Each of these engines is suitable for the high wing CH 750 series or low wing CH 650 designs. 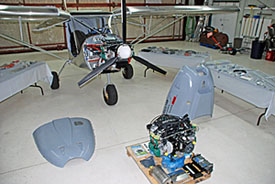 “The first Zenith kit aircraft in North America to fly with the new Rotax 912iS engine was a collaborative effort involving Zenith Aircraft Co., which supplied the aircraft kit, Rotech Research Canada, Ltd. which installed the engine, and Skytek Aircraft Services which assembled the airframe,” reported the company. They added that Skytek developed the firewall-forward package for completing the engine installation. “Both the aircraft and the engine performed flawlessly,” said Sebastien Heinz, President of Zenith Aircraft. “We put 7.5 hours on the CH 750 on the first day and had no squawks. Rotax has done it right.” Rotax BRP reports a steadily growing number of airframe manufacturers have installed the 912iS or are working on the project. 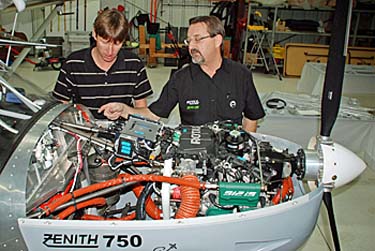 Zenith said installing the fuel-injected 912iS was more complicated than a standard, carbureted 912ULS engine. “However,” Zenith added, “the new model has considerably more redundancy, increased efficiency, reduced pilot workload and is certifiable. It operates without primers, carb heat, or mixture controls.” The engine and accessories are monitored constantly by a built-in computer that alerts pilots to any issues that arise on the ground or in the air. The result is a higher level of reliability and enhanced safety. The Rotax 912iS is a four-cylinder, four-stroke engine with opposed cylinders that is cooled by air and liquid. A dry sump features lubrication from a separate 0.8-gallon oil tank. Hydraulic valve tappets provide automatic adjustment. The 912 iS provides two redundant electronic fuel injection systems, an engine management system, dual electronic ignition, electric starter and an integrated reduction gear. TBO (Time Before Overhaul) is 2,000 hours.