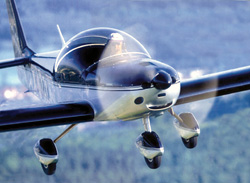 Meet the newest SLSA. This Chris Heintz design has already earned a following as a kit airplane. Now you can buy it fully built. Read my report on Zenith CH601.

On October 5th, 2005 the Zenith CH601 became the newest — and 16th — aircraft in the fleet to win its Special Light Aircraft Approval. The news was announced by Josh Foss of Sportsplanes.com, a national network of regional centers where interested pilots and newcomers can find Sport Pilot training and/or LSA airplanes for sale. Sportsplanes represents several other aircraft including the CH701, Comco-Ikarus’ Breezer and C-42 (both already SLSA certified), and the Russian Sigma. The SLSA version of the CH601 is built by Czech Aircraft Works, while the U.S.-made Zenith CH601 is still sold as a 51% kit.