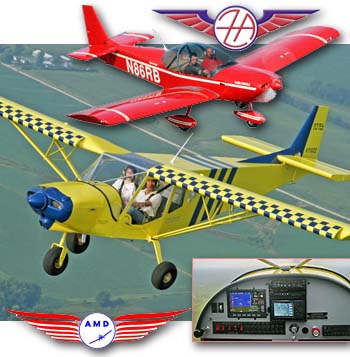 A to Z — as in Aircraft Manufacturing and Design (AMD) to Zenith Aircraft — covers light aviation with a kit business and a fully-built business. You can also buy several models as plans-only versions. AMD is in the top ten of best sellers among Special Light-Sport Aircraft.

Consider the Zenair / Zenith / AMD family of enterprises… Following family patriarch, Canadian Chris Heintz (the designer) are Missouri-based son Sebastien Heintz (the kit supplier) and Georgia-based son Mathieu Heintz (the aircraft producer). Another sibling, Michael Heintz acts as a dealer in California. The Heintzes also have a family of aircraft models. *** Zenith Aircraft Company supplies kits for the 2-seat CH-650 and CH-750 plus the 4-seat CH-801. AMD supplies fully built versions of the 650 and 750 plus the Part 23-certified Alarus. In 2008 the family companies upgraded their top sellers: CH-601 and CH-701. Of these the CH-750 LS is the newest Special LSA on our list. *** Though it visually looks like the CH 701, the 750 LS stands two inches taller and is 11 inches longer with a 2-foot 9-inch greater wingspan, bumping wing area to 144 square feet from 122 on the CH 701. Gross weight rises to the LSA limit of 1,320 pounds making useful load 545 lbs., a quarter more than the 701. Fuel capacity is up to 24 gallons and power comes from a 100-hp Continental O-200. Takeoff remains swift, with even the heavier model clearing the deck in 100 feet or so.