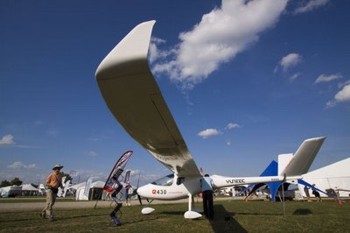 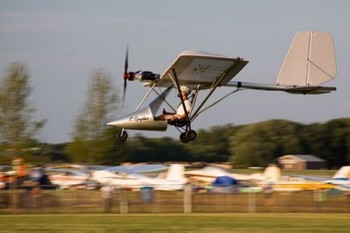 I have seen the future and it is electric. Lots more to say about this than I have time, space or energy here, after my first day at Oshkosh, but this much is clear: electric flight is a reality, just as the Wright Brother’s Flyer made heavier-than-air flight a reality. *** I spent an hour talking with the Yuneec E-430 people. *** FACTOIDS: *** * Made in China *** * The company just built a new 250,000 sq. ft. factory. That’s right: 1/4 MILLION square feet! *** * Company has initial plans to produce 6 different electric flying craft: ultralights, trikes, powered parachutes, hang gliders…and the sleek, beautiful, 45-foot wingspan E-430 (above) that went from light bulb idea to flying prototype in 4 months! *** * Getting FAA to amend LSA reg to admit electric power will take some doing. But you can’t stop a flood tide. *** Also saw Flight Design’s Tom Peghiny wow the crowds in the waning light at the Ultralight flying area with his E-Spyder, also powered by a Yuneec prototype electric propulsion system. *** It was so quiet, you could barely hear him…honestly! My electric RC models make more noise than this electric ultralight. *** I looked at these aircraft and realized I was looking at future history. These are no one-off, “maybe-it’ll-work” oddities. These aircraft will be produced for sale sometime in the next year or so. *** Aviation will never be the same: believe it!