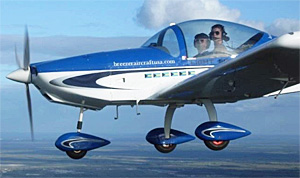 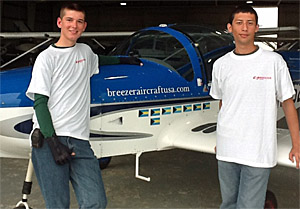 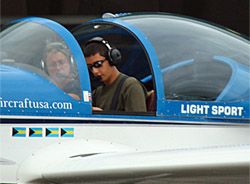 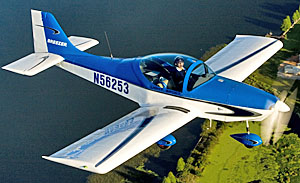 Remember when you were 17? For a pair of Sport Pilots that age, Wednesday at Sun ‘n Fun 2012 will be a day they remember, possibly for the rest of their lives. How cool is that?! *** According to the good folks at Breezer Aircraft USA, “On March 29th, the Sun ‘n Fun air show will open with an event which people all around have declared impossible!” To kick off the show, two Central Florida Aerospace Academy students will use a pair of Breezers to perform a precision formation fly-by to open the afternoon air show. The two pilots are Juniors in high school. *** The Central Florida Aerospace Academy of Kathleen High School is home to some of Polk County’s most advanced students. CFAA is housed in a snazzy new building just across the street from the Florida Air Museum on the Sun ‘n Fun campus. CFAA will also be the location for the show’s popular forums during the event. *** Two young fellows are aspiring Top Gun aviators and have created appropriate nicknames: Phillip “Maverick” Herrington and Angel “Talisman” Castellanos. Both pilots have looked fondly at the the skies since they were five years old. Phillip and Angel joined CFAA for high school, passing their advanced classes with flying colors. They have always been top in their Aerospace classes. *** The students at CFAA, significantly funded by aviation philanthropist James Ray, have the opportunity to practice the skill of piloting an aircraft in the Flight Simulator Lab. The students obtain a grade on how well they perform in certain “profiles,” scenarios set up in the simulator by the aerospace instructor. However, Maverick and Talisman took a different tack when they entered the Sim Lab. For the past month the young Top Guns have been practicing precision formation flying in hopes that Sun ‘n Fun Air Boss Wayne Bogs and new President John “Lites” Leenhouts would approve of a wild dream to fly in the Sun ‘n Fun air show. |||| “Talisman” Castellanos is part of the Air Force JROTC program took a field trip to the Florida Air Museum while in 8th grade year when he discovered CFAA and was immediately interested. In the summer of 2011 he qualified for the first James Ray Future Eagle scholarship that allowed him to complete ground school and solo. He was the first to solo and received a second scholarship to complete a Sport Pilot certificate in a PiperSport LSA. On December 30, 2011 he won his new license, the first at CFAA to do so. Castellanos aspires to be accepted to the Air Force Academy. *** While still in 7th grade “Maverick” Herrington told his dad that he would not get his drivers license until he obtained his pilot license. After discovering CFAA, he applied for a scholarship and received one on May 12, 2011. On May 15th he flew his first flight lesson, and soloed on October 15th. He was scheduled to do his check ride on December 17, 2011 but everything was put on hold when he was the passenger in an Ercoupe that crashed on takeoff November 19th. On December 24, 2011 he climbed back into the airplane for the first time after the accident, soloed again a week later, and on January 28, 2012 received his Sport Pilot certificate. Herrington’s goal is to become a Naval Aviator. He plans to attend Embry Riddle Aeronautical University and wants to join NROTC. Today, Phillip is a 17-year-old licensed Light Sport Pilot and does not hold a drivers license. *** Cool! Along with many thousands of others at Sun ‘n Fun, I’ll be watching these two youngsters.