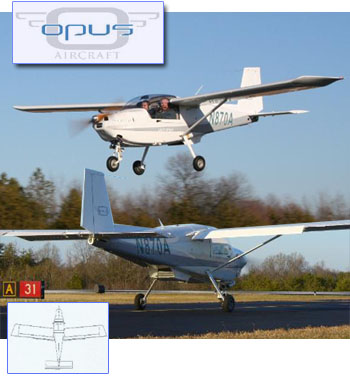 The shoulder wing Super 2 design improves occupant visibility by sweeping the wings forward (lower inset). Like CZAW’s Parrot, Super 2’s canopy opens rearward for entry. At 152 pounds under the max allowed, Super 2 performs well on the 80-hp. I once flew it with the 115-hp R-914 for a…well, “awesome” experience.

Sometimes a new entry slips invisibly under the radar of organizations like EAA or myself. We both (and others) have our eyes wide open for new blips popping up on the screen. Nonetheless the folks at Opus Aircraft were stealthy enough that the Super 2 approved in February 2008 only recently appeared on our SLSA List. The Atlanta MIDO (Manufacturing Inspection District Office) approved the model first created in the UK. *** Super2 is an all-aluminum, shoulder-wing aircraft with a forward sweep to broaden visibility. Originally designed and built by ARV Aviation in England, Super 2 is now made at the Rockingham County Airport in Stoneville, North Carolina. In 1983 Brit’ designer Richard Noble set the world land speed record at Black Lake, Nevada. Opus reported, “While traveling back and forth training for his record attempt, he learned how to fly. After achieving a record, Noble returned to the United Kingdom, found flying expensive and developed a small modern light aircraft. ARV built 30 Super 2s, “all of which are still flying to this day,” said Opus. *** A few specs for Super 2: gross 1,168 pounds; empty 727 pounds; cruise 95-104 knots; 13.1 gallons of fuel; span 28.5 feet; and area 92.5 square feet.