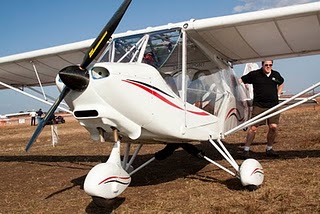 Bend, Oregon’s LSA builder X-Air, makers of the completely American-made X-Air LS – lowest-priced LSA out there at under $60,000 – is finding creative ways to keep the overhead low by selling the airplane directly out of its factory. *** The company is upgrading the airplane in several ways, to be announced at Sun ‘n Fun, and will offer demo flights, flight training, sales and service at the HQ in Bend. *** And if you need another reason to go to Bend, it’s a good town on the eastern side of the spectacular Cascade range.  I’ve spent time there over the years and always enjoyed its natural beauty.  The composite aircraft kitmaker Lancair is also located in Bend. *** Matt Verdieck, X-Air’s friendly GM who helped me demo the X-Air at Sebring (that flight report will be out soon in Plane & Pilot), says the company plans to set up flight centers around the country as well as keep selling through Sportsplanes.com. *** “Ultimately,” says Verdieck, “we hope to see the aircraft on the ramps of numerous flight training operations.” *** He goes on to comment on the economics of flying the Jabiru 80 hp-powered X-Air, which is a low-maintenance, fuel-sipping LSA to be sure.