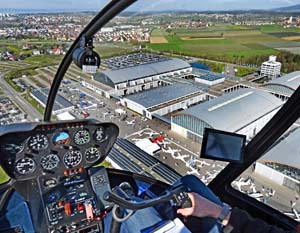 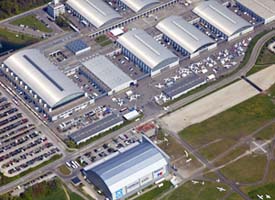 Aero’s big exhibit halls (each the size of a gymnasium). The lower building is the enormous hangar for the Zeppelin airship. photo courtesy Aero 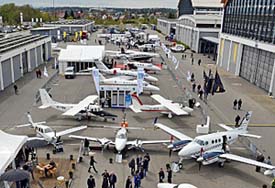 The big halls contain most exhibits but some are displayed outside. photo courtesy Aero

Despite the precarious state of the global economy and contrary to the expectations of many industry observers, I judge 2012 Aero was a success. Held in the picturesque town of Friedrichshafen on the shores of Lake Constance (Bodensee) in Germany it was traditionally a biennial show until 2010, when the organisers took the bold decision to make it an annual event. Having attended every Aero since 2001 I was curious to see how both exhibitors and attendees viewed this major change to the show’s format. [Most European airshows are scheduled alternate years. —DJ] Aero has now been an annual event for a couple of years. I concluded that it is probably is a show too far and that many exhibitors would prefer it to revert to a biennial event. As with many airshows, the cost to exhibit is a significant part of the marketing budget for many companies. With airplane sales across all aviation sectors down from the mid-noughties increased airshow expenses strain the budgets, especially for smaller producers.

*** The end-of-show statistics would seem to back my initial impression up. Visitor numbers were down about 10% on 2011, from 33,400 to 30,800. The last biennial show in 2009 recorded 46,500 visitors and 625 exhibitors [though this is not a completely equal comparison; more visitors per show can logically be expected to attend a show that happens only in alternate years —DJ]. Despite the faster pace Aero 2012 had 550 exhibitors from approximately 30 different countries.

*** Aero didn’t offer an air show this year, but to be brutally honest it was always rubbish anyway. This is not intended to be a slur on the show organizers or display pilots; it’s just that the crowd line is so far displaced from the flight action and the minimum altitude set so high that the entire event lacks the up-close viewing common to American airshows. The conclusion I drew is that the specter of Ramstein still haunts all German air show organizers. On that terrible day of August 28, 1988, 75 people died when a display by the Italian Frecce Tricolori team went horribly wrong. After this tragedy air shows were completely banned in West Germany for several years, and even after the ban was lifted very strict rules governing air displays remain in force.

*** Making up for the tight rules, the most interesting object in the air was the Zeppelin NT airship. This behemoth of the sky never failed to attract attention as it buzzed busily around the airfield flying passenger rides over the beautiful Bodensee.

Although Aero doesn’t offer a dynamic air show, it is a magnificent aviation trade show. While visitor numbers were down a great many attendees were pilots giving vendors a target-rich audience for their flying goods and many orders were reportedly taken. Aero is also a great opportunity for the great and good of European sport aviation to get together. Overall aircraft sales may be down, but judging by the astonishing amount of new aircraft and engines, I would say that European sport aviation is as vibrant as ever!