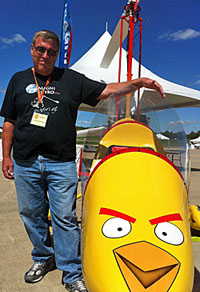 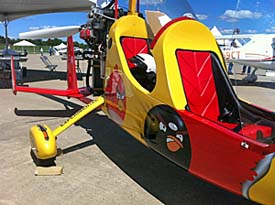 Magni’s M-16 Trainer is an open cockpit tandem-seating gyro that sells for just $90,000 in kit form. 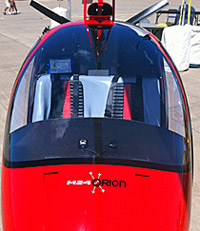 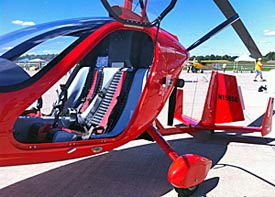 One of the longest suffering participants on the ASTM committee that writes certification standards for Light-Sport Aircraft is Greg Gremminger, the remarkably mild-mannered chair of the gyroplane subcommittee. Demonstrating patience like Job in the Bible, Greg has labored to change FAA’s mind about granting Special LSA status to gyros. He has completely struck out but deserves loud applause for sticking with it so long despite such intransigence*. Regardless of the years-long challenge, at the Midwest LSA Expo in Mt. Vernon, Illinois, Greg managed to put a good spin on the present situation.

Gyroplanes were an American phenomenon at one time. The Benson Gyro was as close to a household word as gyros get. Many others joined the parade over the years. Today, however, the main action is European based and the reason is probably that aviation authorities across the pond are more accommodating. While gyros were indeed part of the LSA regulation that arrived in summer 2004, they were never given SLSA status due, Greg reports, to intraagency squabbling. The Rotorcraft Directorate initially objected yet even though they’ve now dropped their resistance, gyros remain stuck in never-LSA land.

The improved news? LSA Gyros can only be sold as Experimental Amateur Built kits in the USA. So, truly, they aren’t LSA. However, they can be flown by pilots holding the Sport Pilot certificate with no medical. Greg also reports the FAA Kitplane Evaluation Team checklist for gyros recognizes that, for safety, it’s best to allow the manufacturer to do the trickiest work. Short answer result? Greg can assemble a Magni Gyro M-16 Trainer in as little as 150 hours and a first timer will only take 300 hours without having to perform any demanding part fabrication. It’s a bolt-together package with good instructions and Greg’s business can help. The fully enclosed side-by-side M-24 Orion takes about 500 hours but even that is quite tolerable compared to many kit airplanes. So, while it would definitely be superior — and what FAA seemed to intend when the rule was issued — to have ready-to-fly SLSA gyros, the present situation at least allows rotary enthusiasts to get airborne.

The M-16 Trainer sells complete, as a kit, for about $90,000 and the more deluxe Rotax 914 turbo-powered M-24 Orion sells for $106,000. Greg’s Magni USA company can fully build but you’d need to operate in the Experimental Exhibition category, which comes with some very tight restrictions. Greg can also fully build for law enforcement or other “exempted” operators and the ready-to-fly prices are just a few thousand more than the kit price. Still, for most buyers Greg highly recommends the EAB 51% kits as buyers can then operate largely as they wish.

If you’re a fixed wing pilot like me, Greg assures me flying a gyro is quite straightforward. In fact, in some ways it’s even simpler than a conventional aircraft. For example, you fly with your feet on the floor except during crosswind landings and given super slow touchdown speeds, crosswind landings are something of a rarity; just land into the wind and roll hardly any distance. I’ve been up with Greg before and found the experience exhilarating. I promised to go again and actually take some training. Both aircraft at the Midwest LSA Expo looked to be of high quality. Many of us have seen how well they handle winds. Plus, at these prices for well developed flying machines… gotta go gyro!

* Given these comments, it is appropriate to observe that FAA deserves credit as the agency that allowed this experiment of freedom in aviation we call Sport Pilot/Light-Sport Aircraft. Secondly, many FAA employees are fine people with a genuine interest in airplanes and some are very supportive of the SP/LSA regulatory concept. Lastly, this whole initiative has potential to spread around the world and that alone is worth seeing the experiment through to conclusion.