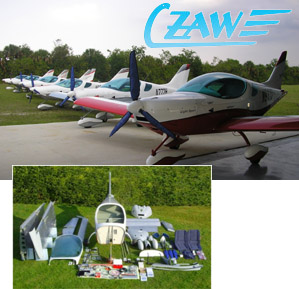 With their factory move completed, CZAW models are arriving in greater numbers. Now in its third generation, read my 2G SportCruiser report from last August and watch for a SPLOG update from the Czech Republic in a few days. And…coming this summer: SportCruiser Quick-Build Kit (inset).

Over a short evaluation period of 25 months we’ve seen fairly consistent results in the top ten of LSA producers based on FAA registrations (see 5/21/07 SPLOG). But that doesn’t tell the whole story. Take Czech Aircraft Works (CZAW) and their best seller, the $75,000 Sport Cruiser. U.S. marketing and sales manager Bob Anderson reported, “CZAW raised additional equity capital last summer to finance a massive expansion.” The company is now housed in a 120,000 square-foot facility. CZAW president, Chip Erwin said, “We have skilled engineers and modern equipment in place. Our production ramp-up is not a ‘future claim.’ We’re doing it right now.” Anderson said part of the investment bought nearly a million dollars of state-of-the-art CNC equipment for matched-hole technology parts. The American-owned, Czech-based company has been delivering over 100 airplanes and kits per year from a smaller factory. They’ve shipped more than 850 aircraft to date. Anderson spoke of 10 SportCruisers delivered to customers just since Sun ‘n Fun 2007…all fresh from the new factory. Take a tour! Or, communicate with other SportCruiser owners.