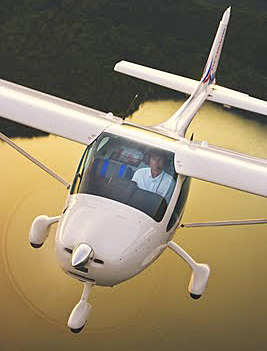 Remos arrived in America with their G-3 model. In 2008 the company upgraded to GX. What’s next? How about the GX NXT. Did you see that coming? *** Remos Aircraft sent out advance word that its new GX NXT will debut at Oshkosh this year. The current GX Aviator II model will not be replaced. The German company’s new NXT version reflects a new instrument panel and price (base: $129,961, a significant drop from the Aviator II). *** Dynon‘s SkyView™, as on an ever-expanding number of other Light-Sport Aircraft, provides the anchor point for the streamlined new deck, which has been reworked to bring more leg room and better visibility over the nose to the cockpit. *** SkyView’s ever-upgrading software suite combines EFIS (electronic flight info system), EMS (engine monitoring system), Synthetic Vision, and Transponder in one unit. An optional second SkyView installation is available as well as Garmin 696 and Dynon autopilot. *** The GX NXT will offer a com radio or a nav/com unit and a wide range of exterior paint schemes. GX is a lovely airplane to fly and I like the folding wing capability of the GX, too. You can also fly with the doors completely off the airplane: lots of fun on those balmy spring, summer and fall days ahead. *** Remos quotes an empty weight of 718 pounds and a useful load of 602 pounds (470 with full fuel), which they claim is tops in the industry. *** The airframe, performance and handling are the same as the Aviator II. Delivery is quoted at 90 days and they’re taking orders now.