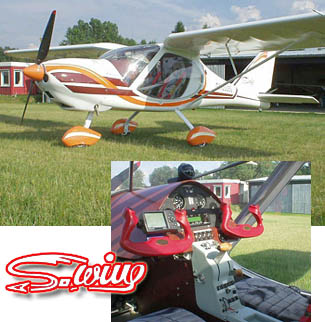 On December 30, 2007 the S-Wing squeaked in as the last SLSA certified this year (as the industry went from 45 to 64 approved models). “We completed the long process and have been issued airworthiness by Brad Burdue,” reported S-wing USA import partners John Stickel and Ron Jones. Check S-Wing specs

Looking like a CT mated with a SportRider, welcome S-Wing (“Swing,” they say). Bigger Americans should also welcome the widest cabin in the LSA fleet, at a spacious 51.95 inches, a whopping 13 inches wider than a Cessna 172. S-Wing is no CT performer and we’ll see if it handles like the SportRider. But whatever its other qualities and features, size matters and S-Wing takes the lead in interior dimension. Cruise is modest, “typical 100 mph,” stated S-Wing USA. Handling qualities have been compared to a Cessna 150. *** S-Wing USA said the Czech factory began production in 2005 and have 30 flying so far; 17 in Europe, 12 in Russia, and one in the USA. “Current production is 20 per year, but could be increased to 40 with current facilities,” projected John Stickel. The U.S. import team is preparing their program but announced coming options: a radio package with transceiver and transponder; BRS parachute system; and floats. With radio and transponder, S-Wing currently sells for a fairly modest $89,900. *** S-Wing was designed by a Russian engineer and test pilot using a composite fuselage. Wings are covered with fabric but a composite wing is currently under development.