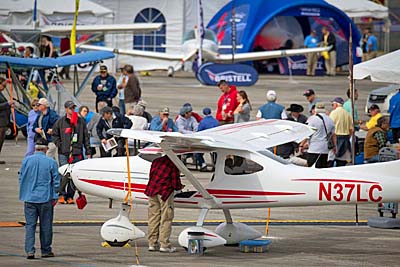 All images with this article were taken from Sebring Expo’s Facebook page. They all appear to be the work of photographer extraordinaire, Jim Koepnick. See more of his superb work on his website.

One of our many video interviews was with Rans designer, Randy Schlitter, regarding his low-wing S-19 Venterra shown here doing a demo at Sebring.

SEBRING EXPO 2016 — Opening day Wednesday started out unseasonably cool … but true to form — Florida is called the Sunshine State for good reason — the sun warmed the day nicely. Several vendors told me they thought it was the best opening day yet for the Sebring Expo.

Thursday was even more pleasant. A few of us showed sunburned faces by the end of the day, but in all, it was a second good day of the event in its 12th year (not coincidentally the same number of years for which we’ve had Sport Pilot / Light-Sport Aircraft). Several vendors reported many qualified customers and many attendees to whom I spoke seemed pleased with the depth of exhibitors and products to examine. Shows like Sebring and the Midwest LSA Expo offer more opportunity for demo flights and longer conversations with vendors who are often besieged with dense crowds at AirVenture or Sun ‘n Fun.

Friday, however, brought a threat of strong thunderstorms, prompting Sebring airport’s executive director to close the show and cease ticket sales. It was also recommended that all the vendors leave the grounds.

Some thought this decision was a bit “drastic,” or “hasty,” but after tornadoes at Sun ‘n Fun in recent years and wild weather at Oshkosh that causes debris to be blown about, sometimes violently, the action to close the event for the day might be described as no more than an excess of caution.

I was just informed that the show will continue for its final day Saturday. Weather will be cool again after the front passes, though it is hard to be too critical while the country’s East Coast gets hammered with blizzards and very hazardous driving.

Saturday at Sebring is also a free day for students and all visitors will find more exhibitors than last year, although a few may have bailed due to the uncertain weather on Friday. However, for those flying or driving north to their home base when Sebring concludes, most saw no hurry to leave as the further north you go the higher the likelihood of encountering truly difficult weather. Florida is looking mighty good in comparison.

On the first two days and planning to continue on Saturday, Videoman Dave and I were scurrying about the show grounds collecting a batch of new video material for your viewing enjoyment in the weeks ahead.

I am pleased to report LAMA‘s Ninth Annual Dinner went very well with about 280 LSA and light kit business persons in attendance. They witnessed the first of the “Great Debates,” this time with engine manufacturing describing their products and answering questions posed by moderator Sebastien Heintz (Zenair). Numerous comments were offered that revealed even those in the business learned new facts about engines.

Of particular interest was a discussion about fuels that can be used with each engine. Part of the fuel debate portrayed ethanol as a very challenging substance not only for the engines but for the airframe systems such as fuel tanks and lines. LAMA Dinner invitees also heard about the coming 2210 and 3310 Jabiru engines, an announcement that caught everyone by surprise.

The debates (photo below) included Rotax, Continental, Jabiru, UL Power, and Viking with comments from publisher Will Tacke regarding electric propulsion.

With its “beta test” of the Great Debates successfully completed, LAMA will now dive deeper into plans for additional Great Debates at Sun ‘n Fun 2016. Debates will be held on LAMA’s space (LSA Mall) in Paradise City. Everyone is encouraged to visit, not only for the debates but to see the newly improved and significantly lengthened runway at Paradise City.