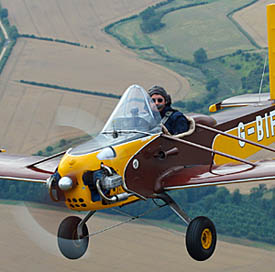 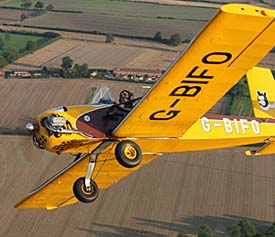 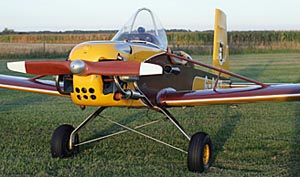 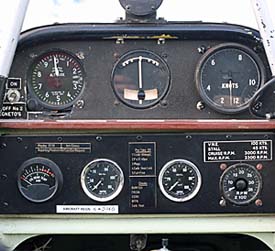 Barely had we published the announcement of Dave Unwin as a new ByDanJohnson.com contributor but what two visitors wrote asking for a review of Dave’s affordable VP-1. We’re pleased to answer that request quickly. Enjoy…! |||| Far below the sun-splashed wings the autumn shadows are lengthening across the Lincolnshire Wolds. Sunset won’t be long, and I’ve still got around 40 nm to go. Thank goodness I’ve got a tailwind, for although the Evans VP-1 Volksplane is many things, one thing it isn’t… is fast! *** So, how does it fly? Well, with only 60 hp the acceleration is far from startling, and it is important to pick up the tail, particularly if the grass is long as the tailwheel is small. Fortunately the large stabilator becomes effective quickly, as does the rudder. No problem keeping her straight. However, VP-1 is hardly over-powered; you must “fly the wing.” You don’t quite have to coax it into the air, but you can’t bully it either. *** Lift-off occurs at around 45 knots, and as soon as the wheels are off the ground there is noticeable vibration. I have to admit that the first few times I flew “Biffo” I found this rather disconcerting, but it is only the wheels revolving. A quick tug on the brake lever cures it instantly. I usually climb at 60 knots until I reach 500 feet, then use 55. Biffo climbs slightly better at 55, but as a very wise old aviator once told me, “Altitude is money in the bank, but speed is money in your pocket!” As the “Veep” is a very draggy, low-inertia machine it means that should the engine fail low down, the options are distinctly limited. I’d rather have the extra five knots because they would certainly come in handy. *** Almost immediately you begin to appreciate that — although a ‘Veep’ is not hard to fly — to get the best out of it you have to fly it well. And, as its best is far from brilliant, the incentive is definitely present. Similarly, as its maximum rate-of-climb is only about 400 fpm at 60 knots, nothing is to be gained (but possibly much to be lost) by flying inaccurately. Needless to say, the ball has to be centered at all times. *** As soon as I’m at 500 feet I raise the nose, slow to 55 and look around. If I can see even the faintest indication of lift that’s where I’ll head. *** An examination of the control and stability reveals that the VP-1 is not exactly harmonized. The rudder (which should be the heaviest primary control) is rather light, while the ailerons are relatively heavy. The stabilator is effective. The roll rate is far from sparkling, although leading with the rudder really does help. Indeed, as the square-cut ailerons generate a fair bit of adverse yaw all turns require prompt and accurate application of rudder if co-ordinated flight is to be maintained. *** Essentially, I’d say that it flies as well as its boxy appearance suggests. An examination of the cruise speed reveals that “Biffo” is happiest at about 65 knots indicated. Initially, maintaining the correct pitch attitude isn’t easy, as the short nose and tall windshield do not provide good reference points. Fuel burn is around four gph, so the still-air range is approximately 130 nm, with a 30 minute reserve. However, at such slow speeds even a relatively small headwind will make a big difference. *** Slow flight is very benign, although I always ensure that I’ve selected carb heat before reducing power, as VW engines are notorious ice-makers. As the speed decays the ASI becomes increasingly vague, before it reluctantly drops the nose and a wing at about 35 knots. Biffo shows very little pre-stall buffet, but on the plus side adding power and reducing pitch produces an immediate recovery. *** Adjusting power produces significant changes in pitch trim. Close the throttle fully and it pitches nose-down quite markedly. *** Back in the circuit I like to keep the energy level up, and maintain 60 knots on base and only start bleeding the speed back to 55 as I roll the wings level, before aiming for 50 “over the fence.” Usually I carry about 2000 rpm until short final. I rarely fly a power-off approach as VP-1’s sink rate is considerable. *** The actual landing is interesting, and unlike that of most taildraggers. Because its attitude on the ground is fairly flat, if you try for a fully held-off three-pointer you will almost certainly touch tailwheel first. This can produce a most unpleasant pitch/buck moment, where it pitches down onto the main wheels before bouncing back up again due to the complete absence of shock absorption. The best way is to flare slightly, maintain a relatively tail-low attitude and then just let it settle on three-points. The powerful rudder makes directional control during the roll-out easy. I never use the wheel brakes.