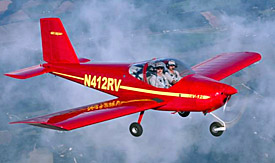 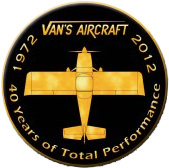 Forty years of Van’s popular RV line of kits was celebrated this year. 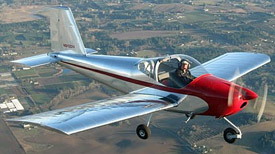 Experimental Amateur Built kits and ELSA are all buyers could choose until yesterday. Watch our video about the kit project.

Honestly, I didn’t expect much LSA news at AOPA’s Summit in Palm Springs, California this week. Despite several LSA on display (Kitfox, Evektor, Flight Design, Arion, Jabiru, SportCruiser, Skycatcher, and CubCrafters), the AOPA event is not a common place for Light-Sport announcements. Certainly I didn’t expect the world’s largest * supplier of kit aircraft to offer a fully built Special LSA.

Van’s Aircraft, Inc.. reported, [We are] pleased to announce a new program to build completed, fly-away, RV-12s.” The Aurora, Oregon company detailed a working agreement with Synergy Air to manufacture the airplanes in the U.S.A. Synergy Air is a well-established company providing instructional seminars, videos, and builder assistance to complete kit airplanes, located at the Eugene, Oregon airport.

Van’s noted, “Nearly 200 kit-built RV-12s have been completed and flown as ELSA and EAB aircraft, accumulating thousands of hours in the hands of typical pilots.” Under LSA rules, the company famous for their line of RV models had to fully build one RV-12 in order to sell ELSA kits. However, until now, that’s been the only factory built example though more than 300 kits have been delivered and almost 200 are operating today. “Production SLSA RV-12s will include the benefits of this real-world flight experience, rather than just factory testing done by professional pilots,” observed the well-known kit producer.

It gets better for those who have lamented the high cost of the top-of-the-line models. “Introductory price of the completed airplane is targeted at $105,000,” stated Van’s. Standard equipment will include the [not fuel injected] Rotax 912ULS engine; Dynon‘s Skyview EFIS, which includes a Mode S transponder and GPS); Garmin‘s SL-40 comm radio, Flightcom stereo intercom; 406Mhz ELT; Flightline interior; and LED lighting for night flight. Options will include wheelpants, ADS-B equipment, a two-axis autopilot, premium paint finishes, and Oregon Aero seats and interior.

Synergy Air is building an initial production run of a dozen aircraft to define and codify the production process. “We plan to offer these 12 aircraft as ‘Signature Edition’ models that will include all options at an introductory price of $115,000, ready for fly-away delivery at the factory,” said Van’s. That makes a good deal an even better one for the first buyers.

Van’s said that it is working to establish a network of Service Centers to maintain and repair the RV-12. “We plan to begin accepting orders before the end of November 2012, and expect initial deliveries in early 2013. Those interested in reserving a delivery position may contact Van’s by calling Gus Funnell at Van’s Aircraft 503-678-6545 or via email.

Many expected Van’s might one day offer a fully-built model and now, finally, RV-12 in SLSA form is coming. Check their intro video below.

* Van’s Aircraft is widely regarded as the leader in the kit airplane industry, with a most impressive 8,000 RVs flying around the globe. However, Quicksilver Aeronautics has delivered almost twice as many of their much-simpler aircraft. Without question, though, Van’s is the present-day leading kit supplier as the company reports producing kits for over 500 complete airplanes each year.