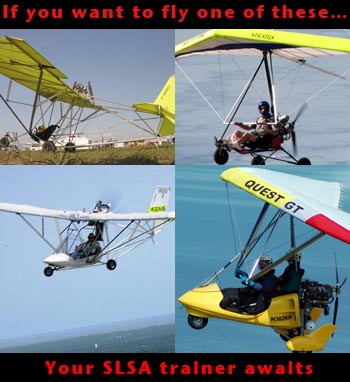 Ah, sweet Part 103 ultralights. These lightest of powered aircraft have the least FAA regulation of any flying machine. A single piece of letter paper holds the entire rule. But how do you learn to safely fly a single seater? Oh, there’s the rub. *** Through January 31, 2010, two-seat ultralights converted to ELSA status may train pilots for hire. Then they must cease… maybe. Some feel that the nation lacks enough such trainers so Aero Sports Connection petitioned for an extension. Sounds reasonable. *** But what about companies that spent resources to win FAA approval? It sounds like those who played by the rules as FAA wished could miss their reward of taking over such training aircraft sales. The controversy has complications and you probably don’t want to read it all. *** But here’s what industry organization LAMA has to say: “In the 4.3 years since the first approval, 100 SLSA models have been approved. Among them are 17 aircraft that can work to train pilots who wish to fly those aircraft or Part 103 ultralight vehicles based on a similar design. That means one in six of all LSA approved models can be called ‘ultralight trainer-capable.’ LAMA congratulates those 12 companies who made the investment to gain LSA approval under the new rule.” These aircraft can be used commercially not only for flight instruction but for rental, something a converted ultralight (ELSA) cannot. And SLSA possess this ability so long as they fly (if maintained as required), regardless of ownership transfer.