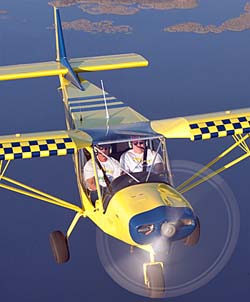 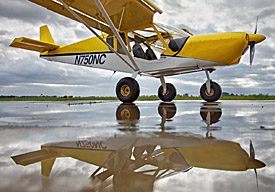 STOL CH 750 reflects well on designer, Chris Heintz, who will be honored at an AirVenture banquet on July 27, 2011. photo courtesy Zenith Aircraft Company 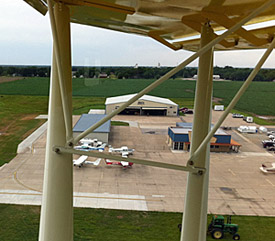 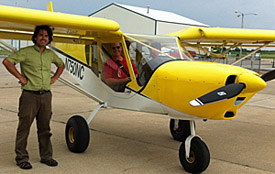 Aviator opinion is widespread about CH 701 and CH 750 being ugly ducklings. Fortunately, plenty of pilots don’t care about looks so long as an airplane flies well (750 does!) and for some the, ahem… distinctive look of 750 is a thing of pride. Think Hummer or the old Volkswagen Thing. Or in the aviation field, think Storch. *** Indeed, Zenith Aircraft Company has shipped more than 1,000 of these birds and the company is presently putting out 200 kits a year* — an enviable performance that most light airplane producers would love to report. *** You might guess 750 replaced 701, but as I discovered both remain in production. The 701 carries a somewhat lower price tag and it is lighter, which allows a builder to use a smaller engine that consumes less fuel. *** CH 750 (video) takes advantage of the LSA weight limit of 1,320 pounds, rising from 701’s 1,100-pound gross weight. The newer model variation comes with almost three feet more span and 20 more square feet of wing to carry the added load without sacrificing low-speed performance. The interior is also larger, a bulging 50 inches at the elbow where curved door panels add space and noticeably increase visibility, including straight down and to the rear. *** In the spread-out Heintz family aviation enterprise, Zenith is the kit builder. The former Aircraft Manufacturing and Design — since sold and now named Eastman Aviation — produces the fully-built Special LSA versions of the 750 and low wing 650. Zenair in Canada builds floats. Zenith is perhaps best known and son Sebastien, who operates the company, is coming up on 20 years in Mexico, Missouri. In light aviation, Zenith represents a well established and well run operation. *** The original CH 701 is even older, introduced in 1986. A genuine short takeoff and landing design, launch requires only a very brief ground roll. In experienced hands, the model’s top attribute brings liftoff in a mere 100 feet thanks significantly to 750’s leading edge slats. No wonder the company’s full name for the aircraft is “STOL CH 750.” *** Climb is another strength at better than 1,000 fpm, with the 100-hp Continental O-200 engine yet fuel burn is less than 6 gph. With Jabiru‘s 120-hp six cylinder engine, climb is even stronger… and takeoff even quicker. An excellent design for low-and-slow drifting over the landscape, those who enjoy aerial sightseeing will love CH 750. Certainly, if you fly from unimproved, short, or soft airstrips, the design is simply more functional than tightly cowled and wheelpanted composite LSA. Read my full-length pilot report in the August 2011 Light Sport and Ultralight Flying magazine.
* Zenith’s 200 kits per year includes all models, but the company reports most are presently the 750/701 series.