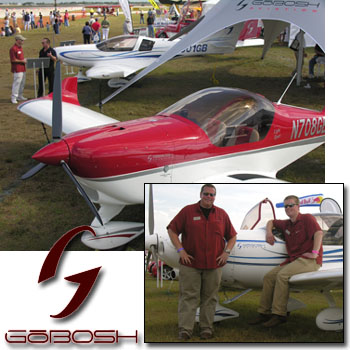 If you’re in Florida next weekend (Mar. 15 & 16), see the Gobosh — and many other LSA — at the Florida Aviation Expo with its LSA Mall attraction. Otherwise, join the faithful at Sun ‘n Fun 2008, where Gobosh and 19 other LSA will fill a new LSA Mall just inside the main entrance. Read my 700S pilot report.

Out of the blue in 2007. Now, they have two in 2008…SLSA models, that is. Gobosh is the interestingly named company (it’s a tech industry thing) that burst on the AirVenture Oshkosh scene with the Gobosh 700S, a rebadged upgrade of the Aero AT-3 from Poland. Just six months later at the Sebring LSA Expo 2008, Gobosh introduced the super sleek 800XP from the Czech Republic’s Aveko, builder of the speedy retractable VL-3 on which 800XP is based. Relying on their experience with the Symphony and other business ventures partners Dave Graham and Tim Baldwin (inset photo, left) are rapidly expanding their presence in light-sport aviation. *** Their two planes are an interesting contrast. Gobosh promotes the metal 700S as a “luxury sport aircraft,” though it seems well aimed at flight schools. The composite 800XP is the high performance model, “which had to be slowed down for LSA rules,” said Dave. While 700S has a 27.3-foot span 800XP has 31.5 feet. An empty 700S tips the scales at 820 pounds while 800XP is 60 pounds lighter, at 760 pounds. A day VFR “Sport” version of the 700S can be had for $107,000 while the better equipped 800XP starts at $123,700 (all prices subject to change).