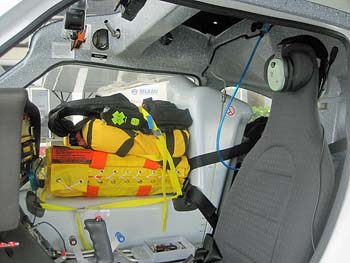 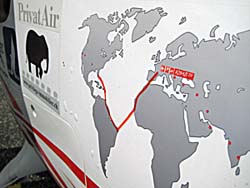 As a changing map on the fuselage of the CTLS shows, the Swiss duo have now crossed the Atlantic and the Caribbean; dots show the path ahead. Keep up with the pair as they continue.

Azimut 270 round-the-world pilots arriving in Miami were greeted by media and fellow LSA enthusiasts. Read their logbook account of the adventure. 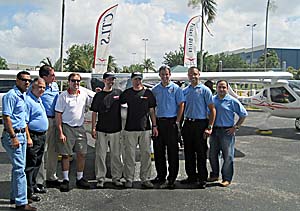 Miami Flight Design dealer, Premiere 1 Aviation, hosted an arrival event for Yannick and Francisco. The pair — with their sponsor Breitling hats on — pose by their twin aircraft with the Premiere 1 staffers and John Hurst from Sebring Aircraft.

As they connect the dots of their plan to circumnavigate the world in celebration of 100 years of aviation in Switzerland, Yannick Bovier and Francisco Agullo have now spanned one immense body of water. The pair of twin Flight Design CTLS “Ecolight” aircraft cleared a big hurdle with the jump across the Atlantic from Africa to Brazil (map photo). Bigger bodies of water await the dynamic duo, two young European airline pilots. But before setting out across the Pacific, they will cruise across the USA to receptions like that which greeted the pair in Maimi. *** Flight Design USA’s John Gilmore says, “These kind of very long distance flight show pilots that Light-Sport Aircraft like CTLS can fly long distances reliably and efficiently.” All round-the-world flights so far in LSA have used the Rotax 912; this engine recently increased its Time Between Overhaul (TBO) to 2,000 hours, a comparable value to long-proven engines like Continental and Lycoming. *** The aircraft were specially fitted with fuel tanks designed to occupy space already first envisioned for a human. CTLS normally has 35 gallons of fuel; the Swiss pair have 120 gallons, a total of 720 pounds of fuel. At economical power settings, this equates to nearly 30 hours of continuous operation, permitting non-stop flight legs of more than 2,500 nautical miles. The additional tank accounts for 510 pounds… and that’s before survival gear needed in the event of an ocean landing. Also notice the limited space left for the pilot, who will spend more than 200 hours in the Pilot in Command seat… solo. Each has a wing man and that’s surely comforting if something goes wrong, but each pilot must also do all the flying, thus, this Azimut 270 undertaking represents genuine twin around-the-world flights.