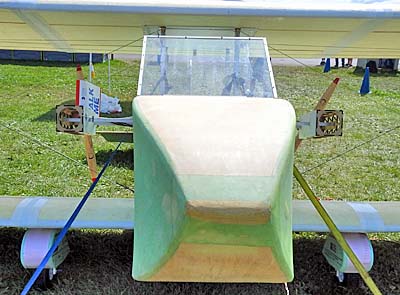 For your enjoyment, here is arguably the most unique airplane I found on the grounds of EAA AirVenture Oshkosh 2018 …and with around 3,000 show planes, that is truly saying something.

This aircraft is made almost entirely of foam sheets that you can buy at Home Depot or Lowe’s. It uses two electric motors for thrust. The aircraft is a biplane taildragger. Batteries provide the fuel.

Plus, yes, it actually flies! Catch some of the action in two videos below.

This unusual arrangement was prepared for EAA’s tough judges. However it fared in that evaluation, this clearly wins an award in my mind for being highly original, unique, super affordable, and OK… it is rather delightfully weird, not that that I see anything wrong with that. 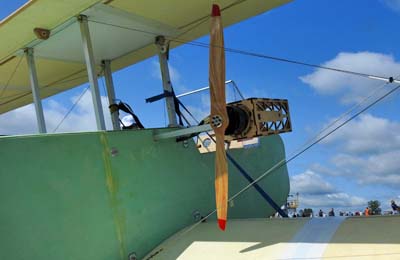 What you are seeing in the nearby photos and videos below is Peter Sripol‘s man-carrying scratch-built aircraft project.

Peter is a longtime modeler and homebuilder with a popular YouTube channel that boasts more than 650,000 subscribers! He brought his foam homebuilt ultralight project to Oshkosh 2018 and we found it in the ultralight area, now rebadged as the “Fun Fly Zone.”

EAA reported, “Peter’s first project was inspired by a visit to EAA AirVenture Oshkosh 2017, and he’s applying lessons learned from that ultralight, which featured wings built with foam board insulation, to his newest model.”

The unorthodox ultralight — I cannot recall ever seeing a biplane twin engine aircraft …certainly not with electric motors — was built from foam board insulation, fiberglass, wood, and some pieces of aluminum. He is so frugal that some of his controls are contained in cardboard boxes. The aircraft weighs around 215 pounds, well under the Part 103 limit of 254 pounds. Part 103 ultralight vehicles can use two or more engines/motors. 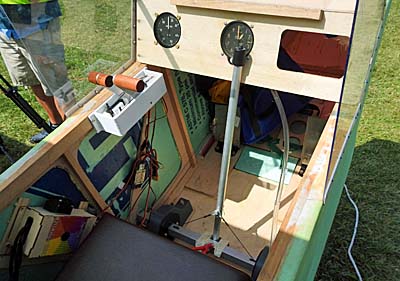 The fuel source is a series of nine batteries driving dual model-airplane engines. Peter built a first ultralight that EAA reported “was minimally planned, in contrast to [this] design, which [he] took time to design in CAD.” The first video explains why the motors have the wood constructions holding them along with other design considerations. The second video, Peter’s, shows some of the other building effort.

Think what you will of this project but I admire his skill, tenacity, originality, and his… well, “go for it” attitude.

We interviewed Peter at AirVenture Oshkosh 2018. See that below but stay tuned for more…

Next you can enjoy Peter’s video about building the project. It’s cleverly done just like his unique aircraft: