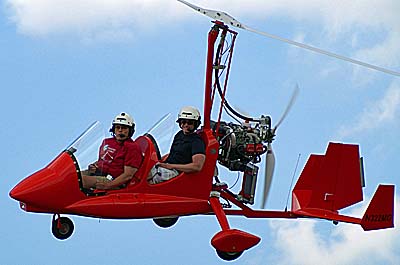 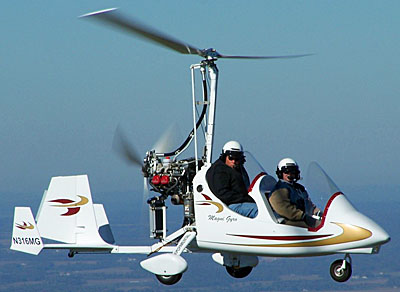 Catch our video with Greg Gremminger to hear about two models from Magni Gyro (shot at the Midwest LSA Expo that is coming up on September 10-11-12). 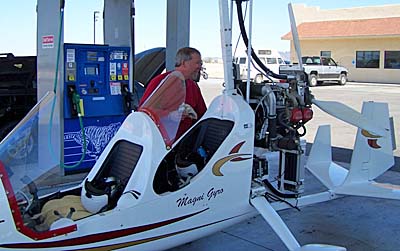 Record-seeking pilot Paul Salmon probably won’t fuel up like this Magni pilot; he is carrying an addition 30 gallons in the aft seat.

As I write this, an intrepid gyro pilot is “out on the course” as we used to say when I flew in hang gliding competitions. By the time you read this, he may be all the way home. What a great effort! I hope Paul earns a world record but either way, I feel certain he enjoyed the experience.

“Paul Salmon is currently crossing the country in a record attempt in a Magni M22,” said Greg Gremminger, importer for the Italian Magni Gyro line of aircraft. “He is trying to set the record for a gyroplane to cross the country in both directions.”

Greg added that Paul is on pace to set the record time, back and forth, in just four days. “This attempt is in the 500 kilogram + (1,100 pound) gyroplane category,” added Greg. “There are no records established for this category. The under 500 kilogram category gyro record is currently about 14 days. So, if Paul is successful, he will hold the record for gyroplanes overall, and gyroplanes under 500 kilogram.”

“Paul named his gyro “Missing Link II,” said Greg. “Johnny Miller set the initial gyroplane record in his “Missing Link” Autogyro in May of 1931.” Eighty four years later, Paul left Torrance, California on Sunday morning, August 23rd at 6:00 AM as soon as the tower opened. He arrived in Jacksonville, Florida on Monday evening. He’s already headed back west, and according to Greg, will probably stop for the night in El Paso, Texas. If all goes well, he should arrive back in California on Wednesday evening the 26th. Whew!

If you read this soon enough, you can follow the final stretch at this link.

According to Paul, the first transcontinental gyroplane flight and record was set by Johnny Miller in May of 1931. Amelia Earhart attempted the flight but was unsuccessful. “Andy Keech is the current holder of the record,” Paul added, “and I am attempting to improve on his record.”

Arriving at Jacksonville at about 5:30 Florida time, Paul took two days to fly across the country, reported Greg. His first day of flying was about 16 hours and the second day about 14.5 hours. “The record is for the total time to cross the country and return. So, this will be about 4 days,” wrote Greg, smashing the current record of 14 days.

As he made his mad dash east then west, Paul was carrying 100 small American flags. “These will be mounted in a display and sold for $100 each,” wrote Paul. He indicated the proceeds will be sent to the ALS Association, in memory of Dr. Scott Gibbs, a former helicopter student of Paul’s who recently perished from ALS. “He was a talented and caring physician and is missed by me and the community.”

Paul is carrying an extra 30-gallon fuel bladder in back seat as he makes his record-seeking flight. “After this attempt, he may add more fuel bladders and attempt to set the world endurance flight record in a gyro,” wrote Greg, “as well as the longest, nonstop leg in a gyro.” One wonders how such an active fellow has time for his day job.

Paul Salmon is an emergency room doctor who Greg says knows how to take power naps when necessary, a skill that may be useful between long flying legs. “He got his rotary wings in Magni gyros more ten years ago,” Greg recalled. “His record-attempt aircraft is the fourth Magni gyro he has owned.” Paul is also a helicopter instructor and has a Robinson dealership plus a certified repair facility in Missouri. “He may be the most active helo instructor in the state,” added Greg!

Unfortunately, as the FAA never approved gyroplanes to be fully built Special LSA, Paul cannot provide compensated instruction in gyros, although various groups including LAMA are investigating how to change that restriction.