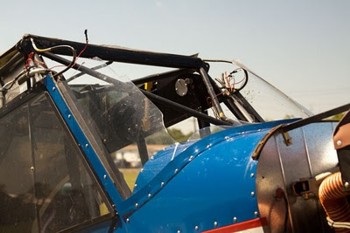 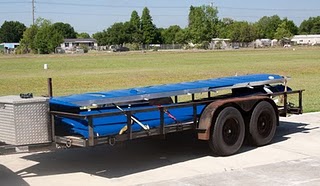 I was just leaving So. Lakeland AirPark (X49) today, bemoaning the lack of activity down there — LSA dealers used to bring their aircraft down there for demos but not many people seem to do that the last couple years, and I don’t know why. *** That’s a shame because it’s a long grass strip with a wonderful country ambience…a great place to try out an LSA without the hussle and bustle of the airshow a few miles north. *** Departing the field, I came across the Dakota Cub folks. They were finishing the unhappy task of bringing the wreckage (fuselage on one trailer, wings on another) to a hangar at X49 until they could get a determination from the insurance people as to whether to rebuild it or write it off as salvage. *** Back at the airshow later, I talked with Amy Gersch and Speedy Richardson, my companions on the interminably long (weather-delayed) trip out to the show all last week. They were both understandably blue about the loss of the airplane Speedy had flown down, and the damage to Amy’s favorite “Little Airplane” as she affectionately, and constantly, calls it. *** She talks to it like it was her personal teddy bear…and Speedy reportedly had a few tears himself when the 180 he flew was trashed. *** But nothing holds these folks down for long. As we watched the opening of the airshow, they both spoke of the Cub enclave at New Holstein, where I hope to meet up with them during Oshkosh this year.