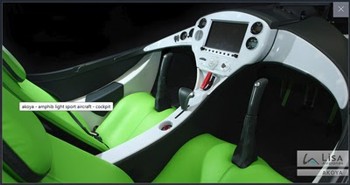 Spacey interior…maybe AKOYA and ICON’s A5 can go on a date. 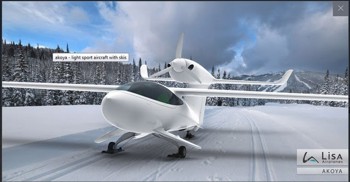 Some bright minds at LISA Airplanes, a French company, had a great idea to take the hydrofoil concept and apply it to an LSA seaplane. I’d often wondered why hydrofoils haven’t been done before, it’s such a great concept.Anyway, the airplane is the AKOYA. The technology for the entire package is patented and called Multi-Access, not the most sizzling name but what the hey, look at how cool those little moustache water wings look sticking out from the hull! *** Now get this: the company claims AKOYA operates as easily from land as from water…or snow! First, to those water wings sticking out: they’re called Seafoils, a trademarked name, which adds a little more marketing sizzle to this steak. *** They’re connected to a retractable gear that can be rigged with wheels or skis, I guess, and also to motor-driven, pivoting wings! There’s also a chute onboard. Very neat. *** LISA Airplanes _ AKOYA premiere from LISA Airplanes on Vimeo. *** The airplane is spec’d out at 18.5 gallons yet can fly 680 miles at 110 knots! No restrictions to local pond hopping for this seabird. *** Gérald Ducoin, a test pilot who flew the plane, praises the revolutionary Seafoils which “offer both fast lift-off and stability. They also considerably simplify landing manevers and taking off from water.”With a 100 hp Rotax, the company claims a 650 foot take/landing distance. *** The company is clearnly not worried about it’s high price: €300,000! That’s Euros, cousins, not greenbacks. *** I hasten to add that LISA will throw in pilot training for all three modes of landing, “personalization” of the airplane, and three years of maintenance and full-time customer assistance. *** The more this LSA phenomenon grows, the more interesting it gets.AKOYA is in flight test mode in France and announces it expects to get LSA certification by mid-2012.