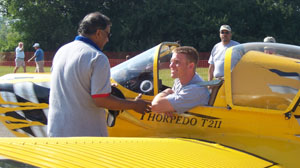 IndUS Aviation president Ram Pattisapu offers a few last words of advice to Preston Bentley before he takes a company-donated Thorpedo on an 8,000-mile tour billed as the first LSA flight to land in 48 states in 30 days. Contact Preston.

Preston Bentley had a plan. He wanted to honor a good friend, raise money for a worthy charity, and do plenty of Light-Sport Aircraft flying. The 26-year-old Private Pilot is presently 12 days into an 8,000-mile flight. Preston is flying a Thorpedo donated by IndUS Aviation; he expects to touch down in each of the lower 48 states in 30 days. Bentley seeks to raise $500,000 for Ronald McDonald House Charities of Greater Cincinnati in the memory of his cousin Seth Bailey, who died in April 2004. The flight’s progress can be followed via an online blog. *** After my spring mishap my wife benefitted from the Quantum House in Florida where I was hospitalized. This was far better than other lodging alternatives as it offered a support group in addition to living quarters. Some 259 Ronald McDonald Houses do likewise and I understand how important these places are to families of those receiving medical care. Preston is a motivated young pilot who certainly picked a beautiful time of year to see the USA by LSA.