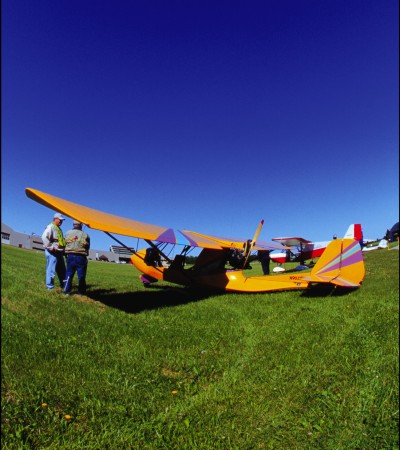 Of course, those who
wish to fly under the
freedoms of FAR
Part 103 can still do
so as long as their
machine meets
those requirements.

The rules under which
operators of two-seat ultra-
lights , like this T-Bird,
fly will change when the sport
pilot/light-sport aircraft rule is finalized.
While there will be added regulations
and cost for such folks, there’ll also be
added benefits| and the good should
outweigh the not-so-good. The transition
will be easier for those pilots and
owners who have participated in an
FAA-recognized ultralight training program
and have logged their time.

You also can’t have more than 5 gallons of fuel on board your singleseat 103 vehicle or 10 gallons for your trainer. Under SP/LSA, there are no fuel limitations. As long as the fuel load doesn’t cause you to exceed the maximum gross weight, you’re good to go.
Insurance – Obtaining insurance for ultralights has been difficult, if not impossible. The lack of registration and verifiable accident statistics has made it impossible for insurance companies to predict their losses. Consequently, most reliable insurance underwriters have refused to offer policies.
With SP/LSA, those problems will be resolved. EAA’s insurance agency, Falcon Insurance, has already announced a program for LSA. Other companies may follow suit.
Financing – Without insurance, financing is impossible to obtain. Lenders want to know they can recoup their investment in the event of an accident. In addition, financing depends on knowing the whereabouts of the asset. With FAA registration, a company can keeps tabs on their investment. When a lender can establish a proper lien on an LSA, they’ll be far more likely to offer financing proposals. Monthly payments can bring aircraft ownership within reach of many more aviators. Fortunately for those who don’t want to finance, plenty of low-cost choices will also be available under SP/LSA.
Rental Aircraft – With insurance and financing comes rental aircraft. While it is legal to rent Part 103 vehicles, it’s not a common practice because insurance and financing aren’t available. Under SP/LSA, rental of special LSA is acceptable; now a business may be successful in such a venture. Perhaps you won’t need to buy an LSA; you may simply rent one.
Log Time Toward Other Pilot Certificates – Time logged in any LSA will count toward other certificates or ratings. This is not true of ultralight time. If you fly a trike, powered parachute, fixed-wing aircraft, or a glider, gyro, or airship, you can log the time, if the aircraft qualifies under the new regulation. It’s another form of acceptance within aviation.
Properly Certificated – When operating under the training exemption to Part 103, you have to announce to your student that the aircraft you are about to fly is uncertificated and that your pilot credential is not an FAA certificate. While safety has been remarkably good for such operations, the mandatory statements and placards make some students nervous. As a sport pilot instructor, you’ll hold a recognized FAA certificate, eliminating those negatives.
Healthier Businesses – With more students for sport pilot instructors and other certificated flight instructors, more rental aircraft, more sales of all types of aircraft, and an increased need for maintenance services, lightsport aviation businesses should become stronger and enjoy increased revenues. In turn, that should translate into more services available for pilots and owners.
Is That All?
Others will discover additional ways SP/LSA will benefit them. The ideas above are only some of the good news. Yes, we’ll all be faced with some fees and expenses we don’t have under Part 103 and its exemption. But we gain more than enough to justify these costs.
Let the fun begin!
When the sport pilot/lightsport aircraft rule is final, you will be able to:
Earn a sport pilot certificate in as few as 20 hours
Earn a sport pilot certificate based on your prior ultralight experience
Log time toward other pilot certificates
Fly a passenger without having to become an instructor
Fly a sport-pilot eligible aircraft with your driver’s license as medical certification
Fly with reduced flight restrictions
Purchase new, ready-to-fly aircraft or more complete kits
Fly faster, better-equipped aircraft
Obtain insurance and financing easier
Rent light-sport aircraft
Conduct flight instruction in a special light-sport aircraft
Operate a light-sport aircraft as a club or in a partnership
Carry a passenger in your registered and converted trainer
Maintain and/or inspect your light-sport aircraft by obtaining a repairman certificate through 16- or 80- hour courses.