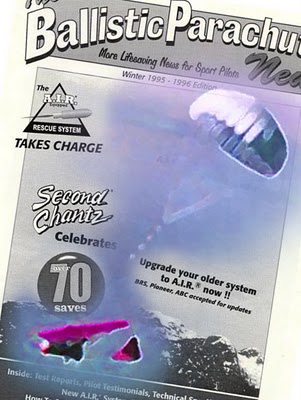 Just out of a 3-day stomach bug sick bed, I must still be a bit delirious ’cause that old Sinatra tune, “Love is wonderful, the second time around” keeps winding through my fuzzy brain. *** No doubt I’m subconsciously morphing into music the news I got yesterday from old hang gliding pal and ultralight/light sport entrepreneur John Dunham that he’s back, in the biz he made so successful in the ’80s – Second Chantz Aerial Survival Equipment.  *** His company sold more than 4,000 ballistic recovery systems when it was in operation, and has documented more than 70 saves worldwide. *** You can read all the gore-y details on John’s blog linked above but a brief bio must include his deep hang gliding/ultralight/LSA background as pilot, test pilot, instructor and savvy manufacturer/businessman from the early ’70s.  He’s an all-around talent, this guy! *** John’s Flight Design West biz in Nevada marketed several LSA including the Flight Design CT and the lovely (and we hope soon-to-be-resurrected) Lambada motorglider. *** So welcome back John! *** By email, he tells me the reinvigorated Second Chantz (which closed shop when he left mid-’90s) will: *** * make and sell recovery systems for most LSA in operation and coming onto the market. *** * repack, update and do scheduled service for ballistic recovery systems made by any manufacturer – including market leader BRS (More than 6,000 old systems require service, and new rockets!) Propellants do get “stale” over time…not good.  Can’t save your neck with a dead load. *** * market and sell Magnum ballistic recovery systems from Czech company Stratos 07, which makes several models for a variety of aircraft from hang gliders and trikes to LSA. *** Around 100 Magnum systems are installed around the U.S. so far, on models from Remos, Flight Design/Europe, Samba, Lambada and more. *** With his own Second Chantz line, John tells me “I’ll offer a rocket system, and update older systems with new rockets…and be price competitive with BRS.” *** He’s also resurrecting his compressed gas deployment propellant systems for all types of light aircraft. *** “I will be working with new pressure cylinders that give me up to 6000 psi…twice the power we worked with 15 years ago!” *** He hopes to develop 10,000 psi cylinders soon, which will  “do the job explosives do for bigger parachute systems, with cool nitrogen gas rockets.” *** John Dunham and Second Chantz look forward to giving BRS, and its “virtual monopoly” on the U.S. market, a friendly run for its money. *** But he’s in it for more than that: “It’s what I know and love…and hearing or reading the words “Thanks for saving my Life” becomes addictive.”