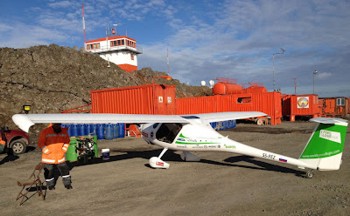 Down and safe with the Pipistrel Virus SW in Antartica. photo courtesy Matevz Lenarcic 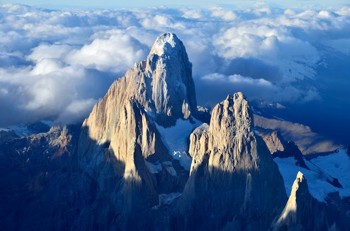 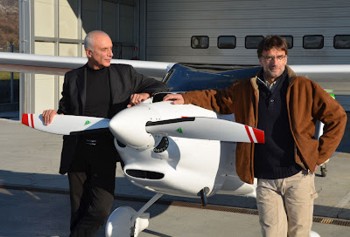 Ivo Boscarol, left, about to give Matevz Lenarcic his sendoff from Slovenia photo courtesy Pipistrel

Matevz Lenarcic, a Slovenian pilot I met briefly when I was at the Pipistrel factory last fall, has raised the bar to ridiculous heights from his previous long distance exploits (including his around-the-worlder in a Pipistrel Sinus motorglider in 2004), by landing in Antarctica! *** He’s making another globe-circling, solo marathon — that’s right, the entire trip, east to west — all by himself, in a  modified Pipistrel Virus SW 914 Turbo. The engine has an Intercooler unit but at least for Antarctica as well as some high-altitude reaches he has planned, engine cooling will be the lesser of his challenges. *** The epic flight in the SW (for Short Wing) began last January from Ljubljana, Slovenia where Pipistrel has its state-of-the-art sustainable energy factory (it actually sells surplus energy back to the Slovenian grid.) *** The route Matevz mapped out is by no means intended to be a short haul either, even by globe-circling standards. By the time he lands back in Slovenia, his route will have crossed the equator six times, ranged more than 48,000 miles (!), overflown seven continents, nearly 60 countries, 120 National Parks, three oceans and will also have topped five world-beater mountain peaks, including Mt. Everest! Yeah, that deserves an exclamation point alright, it’s going to be hard to keep them to a minimum in this piece. *** His landing in Antarctica last Thursday (16 Feb) makes the distance covered so far about 15,000 miles. That’s enough to whip most of us… and he’s got no company and no ground or ocean support for the trip, which adds emphasis to the term “solo” for sure, doesn’t it?   *** Matevz’s Antartica landing was made at the Base Presidente Eduardo Frei Montalva, Chile’s primary base on the continent. It’s located on the Fildes Peninsula, an ice-free area adjacent to Fildes Bay, west of King George Island.To handle the extremes of cold and altitude, the SW is specially modified to handle temperatures down to 60 degrees below zero, Fahrenheit, which he could face above Mt. Everest. He’s also of course carrying supplemental oxygen. *** As a stock plane, the short wing Virus SW cruises at 145 knots at 75% power, which puts it outside the LSA max speed of 120 knots (a longer wing version is sold as an Light-Sport). *** Once he launches from the Antarctic, the intrepid pilot will face some mighty long legs over the Pacific Ocean, including one of more than 2,400 miles! Yikes, is he nuts? *** The airplane has been tanked to carry more fuel but let’s contemplate for a moment flying at 145 knots over the open ocean for more than 16 hours! I’m getting a cold sweat just thinking about it. *** Matevz Lenarcic is no stranger to accomplishment. He has a biology degree and is an alpine climber, paraglider pilot, environmentalist, and photographer. He’s climbed all over the world and summited 26,414-foot Broad Peak in the Himalayas as well as many challenging peaks and routes in Patagonia.He’s written 11 books on nature, photography, climbing and flying, many of which have won awards. He enjoys flying in Europe both for pleasure and his aerial photography business, but as noted above, Iron Man-style flights seem to float his boat… or lift his wings.  *** His warm ups for the current flight include: • a 16,000 mile flight across Siberia in 2002 • the globe-circler in 2004 (nearly 23,000 miles and 23 countries) • Africa — Valley of Life 2005 (10,200 miles and 13 countries) • in 2009 the Alps, A Bird’s Eye View 2006, (36,000 miles all over the Alps) *** Part of his motivation is to show how lightweight, light sport aircraft like the Virus SW can take pilots on great adventures with low fuel burn at decent speeds. The LSA Virus that I flew has a near-41-foot wingspan and is an excellent cruiser as well as a respectable motorglider thanks to the superbly clean aerodynamics and a real fuel-sipper (2.5-3 gph at 75% cruise and 115 knots.) *** Bon Voyage, Matevz Lenarcic!