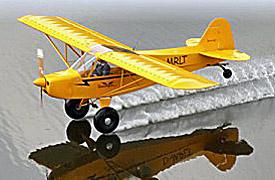 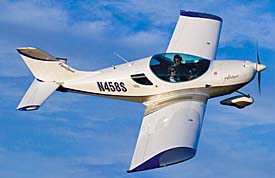 U.S. Sport Aircraft will host one event at their Dallas-area location and will present the SportCruiser. 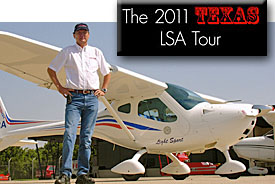 US Aviation at Denton Texas represents both the Tecnam line and the Remos GX pictured here. 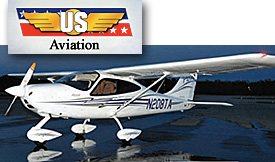 With the largest selection of LSA models, Tecnam will be represented in the Texas LSA Tour.

At the recently concluded Midwest LSA Expo in Mt. Vernon, Illinois, SportairUSA boss Bill Canino and American Legend rep’ Dave Graham confirmed the continuation of a successful series called the LSA Tour. This traveling show-after-the-show concept set in motion a plan to follow airshows with a tour of several LSA manufacturers or importers. The idea is that many interested aviators cannot make the airshows for various reasons. So, as exhibitors head home they schedule a series of stops that may bring the show to your home field. *** The start of the LSA Tour followed the Sebring show in January 2011 with a series of stops in Florida. Then after the Sun ‘n Fun show, a group of vendors went to Georgia and North Carolina. Another series happened in Colorado. Now they’ll be invading Texas, specifically the Dallas-Fort Worth metroplex, an expansive aviation concentration of 50 airports within the 30 nm traffic area surrounding DFW, according to Graham. Over October 14-15-16, the LSA Tour will visit these metroplex airfields: Addison (KADS) with aircraft on display from 2:00 pm to 7:30 pm on Friday, October 14th (to accommodate pilots after their work hours); Denton (KDTO) from 8:00 am to 4:00 pm on Saturday, October 15th — with the LSA Tour organizers predicting “a probable visit by Craig Fuller, president of AOPA; and, Dallas Executive airport (KRBD) from 8:00 am to 4:00 pm on Sunday, October 16th. *** At all events, LSA Tour organizers enlist local support, sometimes making a donation to the local organization. At Addison, “Refreshments will be provided,” said participating host U. S. Sport Aircraft, the local sponsor. *** In the Dallas-Fort Worth series of stops companies are expected to show as many as a dozen Light-Sport Aircraft including (and subject to change): • TL Sting S4, • TL Sirius, • Zlin iCub, • CSA Sport Cruiser, • Remos GX, • Flight Design CTLS, • Legend Cub, • JabiruUS J-230, • Arion Lightning, • Rans S-7LS and S-19 Ventera, • CubCrafters Carbon Cub, plus selected • Tecnam models. These represent most of the best-selling Light-Sport Aircraft in America. When gathered in one group at popular airports, these displays make it very easy for interested aviators to see the best of the breed. |||| LSA Tour contact info… for Addison is Patrick Arnzen (of U.S. Sport Aircraft) 972-735-9099 or 859-496-5777 or email Patrick… for Denton, contact Scott Severen (of US Aviation) 469-585-0680 or email Scott… for Dallas Exec, contact Lana Furra (of the Dallas City Hall) 214-670-7612 or email Lana.