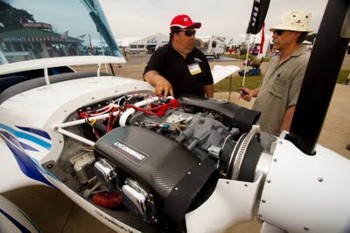 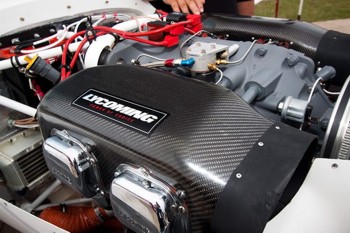 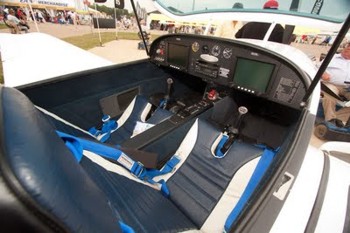 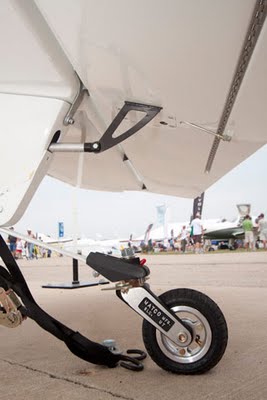 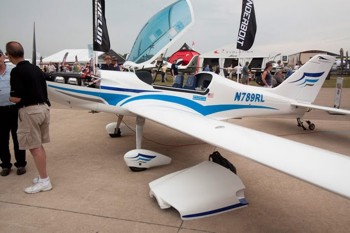 A year ago I did a blog piece here as well as a piece in the magazine about the resurrected “Lazarus Machine”, Renegade Light Sport’s super sexy low wing, about-to-be Lycoming IO-233-LSA-powered, all composite S-LSA. *** I found Renegade’s prime mover Christopher “Doc” Bailey at the flashy Lycoming display and before I could say “Lightning round!” he was regaling me, as only Doc can do, with the leaps and bounds the company has made in the last year. *** I’m going to serve up the rapid-fire infostream in his own words, but before I do, here’s the short tell: the Falcon is done with testing, is in production, comes in two configurations, tricycle and taildragger, sells for $125,000 with a bunch of nice features (including 10″ Dynon SkyView, full Garmin stack and dual electronic ignition) and if your mouth isn’t watering yet, I’m stepping to the side and take it away Doc! *** “The first production model Renegade Falcon with the Lycoming IO-233-LSA is owned by our dealer on Long Island, NY – Steve Norman. It’s the airplane you see right here (and in the photos).” *** “The engine is FAA Part 33 certified. The airframe is ASTM certified. We’re done with R&D, we’ve been through a year of testing with the 233. We’ve tested six fuel injection systems, five electronic ignition systems (and settled on the Lightspeed dual ignition system), four different exhaust systems (and settled on the Vetterman exhaust), and three or four panel mounts. We just brought on the Catto 3-blade, nickel-edge composite prop, we also tested Sensenich and others.” ***  “And we’re getting 1500 fpm climb solo, 4.6 gph cruise at 2400 rpm, and we’re just where we said we would be in a year.” *** “We’ve put in 100 hours of test flying so far.” *** “This airplane, Steve Norman’s, has everything you can get, the stuff I mentioned and dual Grand Rapids Synthetic Vision with built-in highway in the sky and autopilot; a ballistic chute, ostrich skin seats…” *** Real ostrich skins? I asked. *** “You bet, I’m the one who paid for them, they were real alright!” *** “So many guys came up and said they’d flown Cubs and other taildraggers all their lives, and when 500 people tell you they want that, you better take notice! So we now have a taildragger version too, with beefy, durable 7071-T6 gear for flight schools and a Matco 42-degree breakaway tailwheel.” ***  “We’ve got five engines coming from Lycoming this month, we’ve sold six airplanes since we’ve been here at the show, we’re in full production here, everything is built in the U.S., we have a new autoclave system set up by former Boeing engineers, and like I said we’ve come a long way in a year.” *** “Before the prop has turned 45 degrees, the ignition system is producing a 120,000 volt spark and the engine starts right up like a car. We call this engine the Rotax Slayer! We’re getting 305 degrees on the CHT, 1000 degrees on the EGT, so it’s burning efficiently and burning cool. We’re placarding max level rpm at 2400 to maintain the 120-knot LSA restriction.” *** “Future enhancements will include room for golf clubs, wing locker baggage, winglets for more stability, things like that.” *** I asked how fast it was now at full power. “You don’t want me to tell you that,” he said with a laugh. “It’s fast. We’ll placard it at 2400 rpm for 120 knots. We had a CFII bring it out here from Kansas City. He was doing 140 knots at 2700 rpm.” *** “People ask me, ‘Why not restrict the engine?’ That’s a huge safety issue for me. If you’re downwind to land and the wind falls out, you may need all the power you can get. Why restrict that? If you go over that 2400 rpm setting, it’s on you legally but I’m not going to take it away. It’s like CubCrafters did with their 180 hp engine, placarding it to a max of five minutes full power.” *** “The first production taildragger Falcon is going to Switzerland, to the guy who started the Swatch company. We’ve got orders for five, with seven airframes done, we can make five a month and all of it is out of our Lees Summit, MO plant.” *** “Weight for the taildragger is 795 lbs. For the tricycle gear it’s 814, with everything installed. It gets off in 200-300 feet easily. Before you get the throttle all the way up, it’s already rotated.” *** “It will throw you back into the seat; with the Catto prop you really feel the thrust. It really takes off. We figure we’re getting 123-125 hp with the fuel injection. With the traditional carbureted version, we were getting 120 knots at 2750 rpm. With the fuel injection, we dropped 300 rpm to get the same speed, at the same altitude and in the same weather. It just feels smoother. We think it’s that 120,000 volt spark. It was burning 5.5 gph with the carburetion: with electronic ignition, it’s 4.6.” *** All that’s left now is for me to fly it for a pirep which I hope to do here at the show and let you know how much of this is real, and how much is “Doc”-ese! *** One last word: the airplane, already a winner in the looks department, has a beautiful engine installation. It’s clean, it’s elegant, it’s beautiful. And, for those “graying” types Doc talks about who still don’t trust the well-proven Rotax, the Lycoming is the deal-maker. It’ll be interesting to see how much support this all-American, $125K looker garners in the market place.