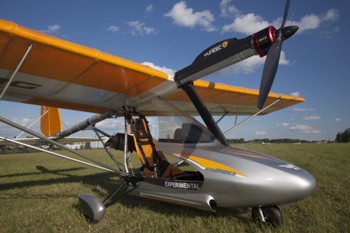 The shape of the new age: GreenWing International's eSpyder debuts at Oshkosh as a production kit, with orders being taken. First deliveries of the $39,900 Experimental Amateur Built kit will come in the last quarter of this year. Production has already begun. I was privileged to be the only non-GreenWing staffer to be allowed to fly the Yuneec-powered e-craft at the Oshkosh show. I'll have a full report in next month's issue. Short tell: the Ultralight flight pattern briefing was far more intimidating than my flight, which even in a bit of windy/gusty conditions was, truly and literally a breeze. I snapped some self-images with my smartphone in flight…and could hear the simulated shutter click of the phone! Yep: it's that quiet. Imagine a large fan in your living room: about that loud, quieter than two people talking or around 51 db. It's a fun bird to fly too. 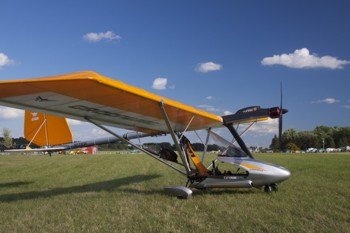 Lovely on the ground, a cinch to fly, quiet as a church mouse. Empty weight 410 lbs. Lithium battery power for more than 1 hour endurance. Emergency parachute system and complete "smart" battery charging system included in the price. As Dan Johnson cleverly said, when you buy this airplane, it's as if you're prebuying the fuel since you'll never pay for gas again. Cost of one hour's flight time: $1.60 in electricity! 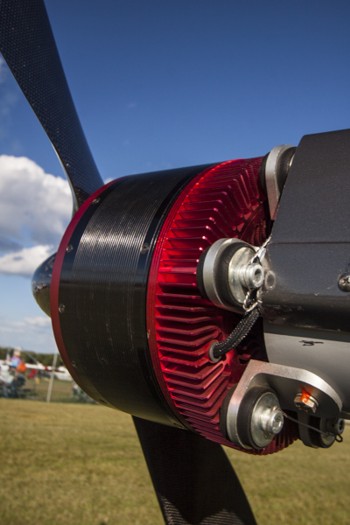 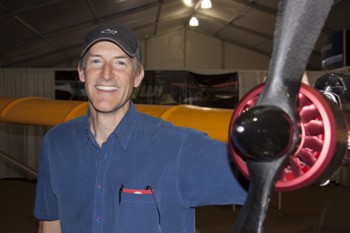 Erik Lindbergh, visionary supporter of alternative flight and private space exploration, next to the brushless motor of the eSpyder. I'll have a fascinating interview with Erik as the subject of my next column along with the eSpyder pilot report. I'm happy to report that he and I belong to an as-yet small club of folks who've flown the eSpyder…but his turn is doubly impressive: he'd never flown an ultralight-style airplane in his life, and since it's a single-seater, first flight is a solo! Welcome to that club too Erik. 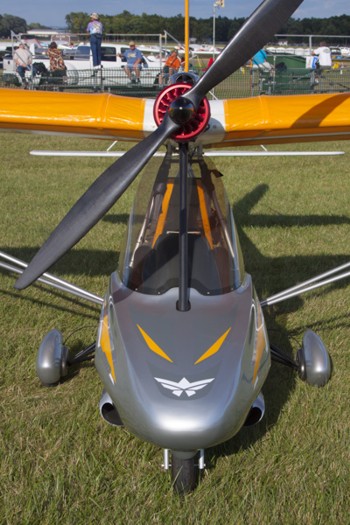 The eSpyder, all dressed up and plenty of places to go. 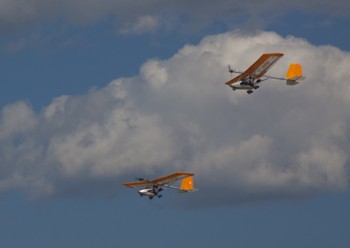 Two electric-powered GreenWing eSpyders impress the crowds as they pass in review during the main air show. Chris LeFage led the way and even in the 20 knot direct crosswinds the pilots held tight, impressive for ultralight-style airframes…and even from the front of the flight line, I couldn't hear a whisper of sound from the electric motors. 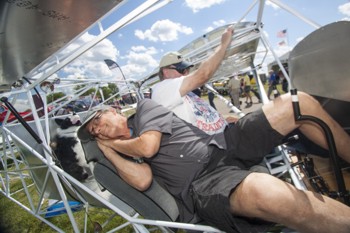 Randy Schlitter hams it up in the Rans S-20 Raven's airframe to demonstrate the reclining seats. Behind him is a very spacious all-metal cargo bay, complete with cuddly sheepdog toy copilot (optional). 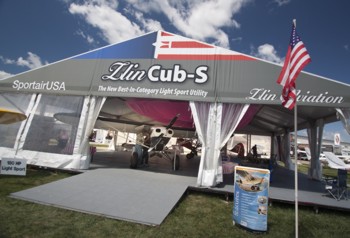 SportAir USA had a big presence this year with the Bobber open frame Zlin Cub taildragger, Sting 4 and Cub-S on display. Look for pilot reports on these flivvers in the near future. 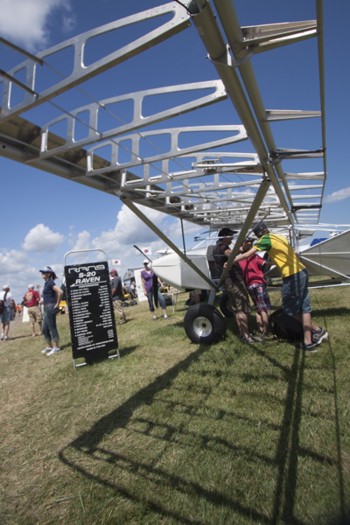 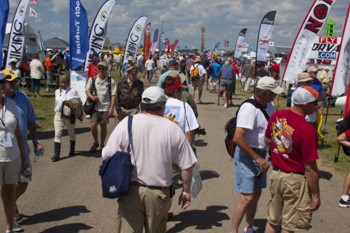 Gorgeous, cool – yes, cool – and lovely weather brought the folks out in droves, here checking out the kit companies in the North Display Area. 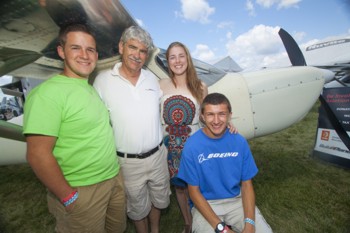 Old friend and former P&P Editor Lyn Freeman (he's the seasoned elf, second from left) and three compatriots from the Build A Plane Foundation he started up several years ago. These three high school students and five others, together built two – not one but two – Glasair Sportsman kit aircraft in two weeks! Build A Plane is an amazing program, check them out online.

In the wee and foot-throbbing hours after wandering the highways and byways of the vast Oshkosh Airventure showgrounds all day, here’s a taste of some of the cool things encountered so far from my abbreviated visit – my 32nd year in attendance since 1981…and every year brings new wonders and old friends: threads of gold and silver. *** *** ***