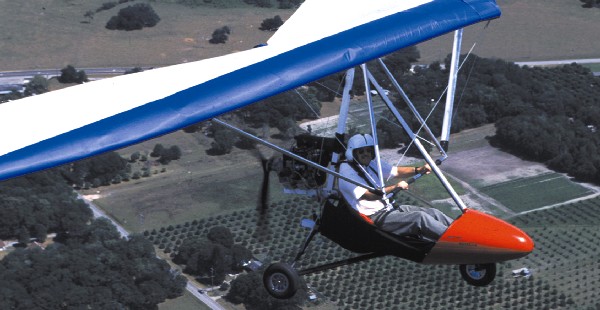 Trikes: they’re enjoyed around the world by thousands of pilots A what?
Not sure what a “trike” is, are you? Don’t feel bad. Although these machines may represent the largest production of aircraft in the world, many pilots have overlooked their appeal.

A trike is an aircraft made of two principle parts: a wing that resembles a hang glider (but is more stoutly built) and a carriage. The latter element is comprised of an engine, landing gear, seat and instrumentation. Within certain bounds, the wings and carriage can be mixed and matched.
They may sound strange, but they are enjoyed around the world by thousands of pilots. In fact, among European light aviation enthusiasts, about one in every two flies a trike.
Just a toy? Not!
In case you think that such a contraption must be only for young sport enthusiasts that don’t have enough money for a “real” airplane, think again.
One of the leading manufacturers of trikes in the world is a British concern that makes the Quantum 912. They’ve built over 1,500 aircraft in their 15-year existence and their aircraft can do some amazing things.
By way of example, one such machine, called the Global Flyer (sponsored by GT Global, a Swiss Finance Company) recently completed an around-the-world flight. And this impressive achievement wasn’t a crazy stunt.
In a highly planned and publicized effort, well-known British broadcaster and pilot Brian Milton made the global circuit in 120 days. He arrived back home less than two weeks ago. Should such an endeavor still fail to impress you, consider that his last long leg was 8.5 hours from Iceland to Scotland, all over water.
Could it be for you?
After years of persistent effort, trike manufacturers are starting to make good inroads to the American flying market (many producers are European, although several companies also build these aircraft in the United States as well).
You may think that most buyers are ultralight pilots and you’re right, but an increasing number of aviators are considering trikes because of their versatility, compactness, and sheer joy of flight. Company Director Bill Sherlock, here supporting his American distributor, personally knows four British Air captains that own their trikes.
One reason for both the successful round-the-world adventure and for interest from GA pilots is the powerplant. Pegasus was one of the very first trike makers to successfully incorporate the increasingly popular Rotax 912 four-stroke engine.
Another reason for widespread interest is certification. Indeed, the entire line of Pegasus trikes has full Section S certification from Britain’s CAA. Much more than a simple industry program, the Quantum trikes have passed virtually all of the same detailed government examination as required to certify a new four-seater in the USA.
Given this intensive certification program, a fully built retail price of $33,000 for the Quantum 912 seems pretty reasonable. The Quantum 912 with its highly developed Q2 wing, is the high-end aircraft from Pegasus. On the other end, their two-stroke-powered 503 basic model – which features the same wing – is only about $17,000. Anyone attending AirVenture ’98 surely knows that a brand-new, fully certified aircraft for less then $20,000 represents a bargain.
Pegasus boasts an engineering team of four led by Dr. William Brooks. It probably doesn’t surprise you to know Brooks flies and enjoys both ultralights and hang gliders. But you may be intrigued to know that this doctor of aviation design works only four days a week for Pegasus; on the fifth day he designs the new generation wing spar for AirBus at British Aerospace (his specialty is composites).
Want to know more?
If you’ll just venture to the far south end of AirVenture ’98, you can have a close look at the Quantum 912 and speak with Bill Sherlock, an engaging Englishman. He’ll be assisted by Rob Rollison of Rollison Aircraft who represents the Pegasus line in America.