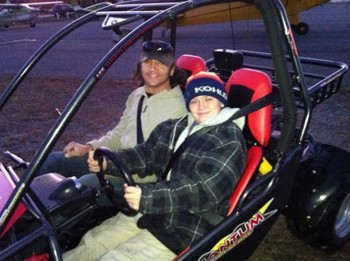 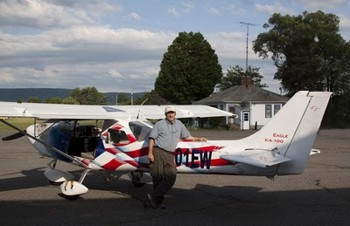 On those weekends that I’m hanging out at my newly adopted country airport of Great Barrington, MA (GBR), I always look forward to seeing young Joe Solan. *** Joe’s 12…going on 28, as someone at the airport affectionately quipped. *** Joe is one great kid, the kind I sometimes wish I’d been more like when I was his age. *** When we first greet, whether he’s dutifully dragging a heavy gas pump hose that weighs half what he does, answering the airport office phone or hunting up a charged handheld battery, he’ll flash a friendly smile, say “Hi!”, and stick out his hand like the straight-up little man he is. *** He’s growing up at the airport, mentored in running the business and mentored in life by his dad Rick, a co-owner of the airport with lots of great ideas for growing its prosperity. *** Rick’s also the guy who keeps American Airlines 777 drivers on the straight and narrow as a top-level inspector pilot. *** I wrote a column recently for Plane & Pilot about GBR, extolling the charms, which are manifest, of this wonderful throwback to a kinder aviation era. *** It’s melange of hangar styles, tied-down airplanes and acres of grass, surrounded by the bucolic Berkshire Hills farmland of western Mass., inspires flights of poetic as well as winged fantasy throughout the year. *** The 2600′ paved runway has a grass strip right next to it, and there’s another short-field strip at an angle alongside the triangle of tall corn that grows in the summer. *** The recently repaired asphalt is long enough to let fast singles and some light twins in, but short enough, with the very tall trees at the west end of the runway, to inspire routine vigilance and Plan B thinking ahead on takeoff or landing.Back to Joe: he’s one of those genuine kids you like immediately. He doesn’t come off entitled or overindulged, has an adult-like work ethic, and like GBR, is a throwback himself to an earlier time when kids were eager to help out any way they could and took no small measure of quiet pride in doing so. *** Oh, he gets to be a kid too, flying electric-powered RC models on the far side of the airport, or roaring by in the very cool Quantum Go Kart his dad just bought for him. *** Mostly though you’ll see him holding the unicom station mic to give radio checks or wind and weather updates, gassing up planes and running errands. *** Last weekend was a classic late fall day in New England. Clear and crisp, in the low ’40s, no winds to speak of: the kind of flying day you just don’t pass up if you can help it. *** Sure enough, lots of folks and airplanes were out. Pilots and friends shot landings and swapped tall tales over doughnuts and coffee or munching down a tangerine from the wooden crate Rick always has on hand in the office/”clubhouse”. *** I was eager to go flying but leery of hand-propping the cold J3 engine without some assistance — and everybody else was busy. *** “I can do it,” offered Joe, confidently grabbing his parka and waving me to the door. *** Outside, he offered me the right seat in his go kart. Of course it was less than a minute’s walk to the Cub, but no way was I going to pass up a chance to share that ride. *** We shot across the ramp and onto the grass, moved some planes around and rolled out the J3. I put on some gloves against the chill and Joe hopped into the front seat. *** “Switch off,” he called out, somewhat dwarfed by the big cockpit but not intimidated one bit. *** “Switch off,” I said back. *** “Throttle cracked,” he said. *** “Roger that.” *** “Brakes on,” he cried, all 100 lbs. of him applied directly to the little heel pedals to keep me safe in case the Cub surged forward. *** I gave the prop hub a good tug: didn’t budge an inch. That’s my Little Big Man. *** It’s not every day you trust your life to a 12 year old future pilot. *** But Joe’s not your typical 12 year old. *** As Les, one of the local pilots, quipped, “This is a kid who will go far, whatever he sets his sights on.” *** The engine flooded a couple times, but Joe hung in there, giving me suggestions, offering advice (he’s learned quite a lot already from Rick) and after 15 minutes, that cold-soaked 65-horse mill caught and came to life. *** Joe worked the throttle just right to keep her idling, waited until I climbed into the rear seat, then hopped out, waved and drove off in the kart to help someone else. *** It’s less common for kids today to have the kind of experience Joe is having. Access to airports starts with an intimidating fence and a coded gate, the sad icons of a frightened age. *** But we can be happy there are kids like Joe Solan, and big kids like Rick Solan, who’s favorite flying is in one of his J3s at the field where he learned to fly in the ’70s. *** They both help keep us all young, and ever mindful to practice gratitude for the gift of flight.