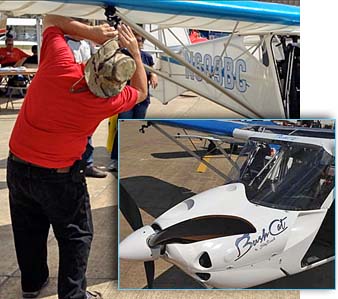 Videoman Dave almost literally bending over backwards as he checks the Garmin VIRB camera on the SkyReach BushCat. 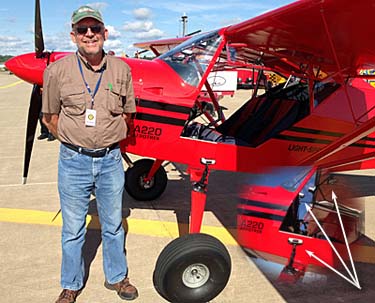 Ron Waechter poses beside his “Ferrari Red” Aerotrek as used for the VPR. 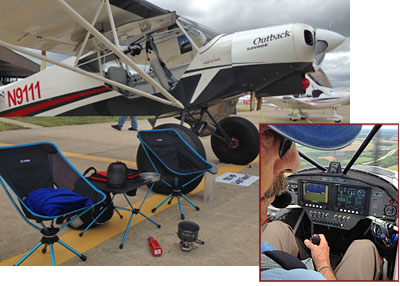 We look over the shoulder of SportairUSA‘s Bill Canino while flying the 180-horsepower Zlin Outback. Note the very light camping gear in the foreground; it all packs down small for bush duty. 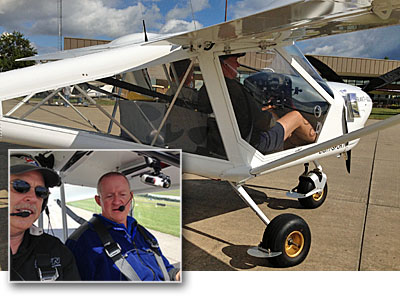 Onboard the “see-through” Aeroprakt A-22 with U.S importer, Dennis Long.

When this website went live a few months before the Sport Pilot & Light-Sport Aircraft rule was announced at Oshkosh 2004, it began life as an archive of several hundred pilot reports I had written for a number of print magazines in aviation. That launch seems a long time ago … it has been eleven and a half years. (Development started only a few years after the World Wide Web emerged and ByDanJohnson.com went live in April 2004.)

One year after going live, I began to add news via a blog, which I called “Splog,” for Sport Pilot web log. Videos started in 2008 and by 2015, news and video have become the primary content items.

You might be surprised to hear ByDanJohnson.com predates YouTube, which began when three former PayPal employees created a video-sharing website. The Internet domain name YouTube.com was activated on February 14, 2005 and the website went public in November of that same year. Google subsequently bought it but even Google is only 17 years old; it went live on September 4th, 1998. New as it is in the world of aviation the SP/LSA rule is actually a couple months older than YouTube. I don’t know about you but I find that rather amazing.

For about seven years, Videoman Dave and I have been making 5-10 minute videos about Light-Sport Aircraft, light kit aircraft, ultralights, and light GA aircraft. We have partnered on more than 400 of these and many more are coming. See most of them here, organized for easier location, or find all of Dave’s 1,000+ videos on his YouTube channel. Some of these are approaching one million views and the group generates more than 1.5 million minutes of viewing every month.

Along the way we began to make what we now call Video Pilot Reports or VPRs. In the age of YouTube, this is the equivalent of detailed pilot reports or aircraft reviews I used to write for several aviation magazines. I find it exciting to return to the roots of this website albeit in the electronic form that dominates culture today. The videos are watched around the globe although I regret my Chinese readers cannot currently view these YouTube-hosted videos; perhaps things will change in that fast-evolving country.

Making VPRs is significantly more work than doing the interviews that make up the bulk of our video library. These are longer videos, up to 30 minutes or so, sometimes broken into two parts.

As we work on these videos, we are attracted to locations like Mt. Vernon, home to the Mid-West LSA Expo. We like the airport run by the very capable and popular Chris Collins as it is far easier to achieve these video productions. The airplanes are readily available and — after we’ve found camera locations and mounted them — we can in literally five minutes or less climb on board and be in the air. No other event, with the possible exception of Sebring, offers such swift access to the runway. Also, the airport itself is large and wide open and the surrounding area is accessible for in-flight maneuvering without having to stray too far away. That is hugely valuable.

The work effort begins as we mount a number of cameras. We use up to seven Garmin VIRB cameras plus Dave uses his larger camera to shoot takeoffs and landings from the ground. To provide many views, VIRBs are mounted outside in multiple locations and we use three or more inside, two of which capture audio from our cockpit communications. The effort is broken into three segments.

Shot on the ground before entering the cockpit we cover … How and where the airplane is built, its construction and materials, the powerplant, gear, canopy, and other major or distinctive features. We present a basic description and may compare the subject to other aircraft.

After entering the cockpit, we cover such “human factors” as entry, cockpit layout, visibility, seats and rudder pedal adjustment, ventilation, instrumentation, switches, and control systems along with any special characteristics of the subject aircraft.

Finally, we roll out to the runway and go aloft for a 30-60 minute flight exploring taxi, ground steering and braking, takeoff techniques and measurement, evaluate initial and en route climb. We will do a full regimen of stalls including power-off or landing approach stalls, power-on or departure stalls, and accelerated or stalls in turns. We will evaluate handling qualities in dutch roll coordination exercises, do steep turns, turns-over-a-road, aileron- or rudder-only turning, and high and slow speed handling. We will measure high and low speeds and finally return to the airport for some landings, attempting to investigate (if conditions permit) normal, short, and soft field techniques with flap use and slipping as recommended.

So, VPRs have become a valuable part of this website and the enterprise of Videoman Dave. I leave you with this thought: Every minute of the day, 24 hours a day, seven days a week … 300 hours of video are uploaded to YouTube. We are pleased to be part of that tsunami of content and hope you continue to watch and enjoy. As the Frito Lay company used to advertise about their Dorito-brand snack chips … Consume all you want. “We’ll make more.” Even better than Doritos, all our videos are free.•

In October Dave and I are traveling to the Flying Aviation Expo in Palm Springs, California and immediately afterward to the Copperstate show south of Phoenix where we will add many more videos to the library.

• We offer our videos for free but they are definitely not free to make. Your support of Dave’s YouTube channel and this website are essential if we are to keep making more.