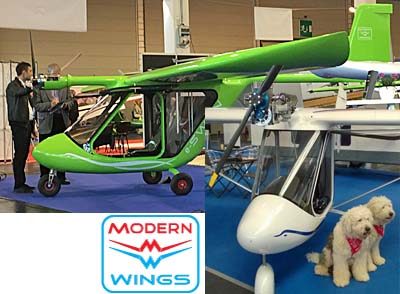 Swan (green) is seen with a clean electric motor installation at Aero 2017. The white one from an earlier Aero has a gasoline engine. Puppies are optional.

In my views of Swan at previous Aero Friedrichshafen shows, the design caught my eye as it was (a) a single seater, (b) light enough to qualify as a Part 103 ultralight or its European equivalents, and (c) as it was an all-composite, nicely designed aircraft. Commonly, Part 103-capable designs are much more basic to remain within the tight limits. This statement also applies to the German 120-kilogram category or to Britain’s Single Seat DeRegulated (SSDR) description.

As Aero contributor and Powered Sport Flying publisher Roy Beisswenger and I frequently discuss, the most likely place for electric propulsion to work today is in ultralights. This is because in very light aircraft with more local flying missions, battery weights for a modest period of flying (30-60 minutes) is already achievable in the very lightest of powered aircraft. We have been discussing this with FAA for more than three years.

I was especially interested to see that Swan had a electric motor installation at Aero 2017 and it appeared as clean as their other aircraft displays have been. 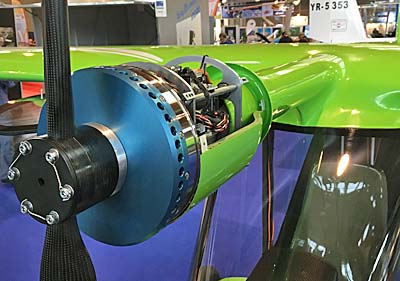 SWAN is a single-seater ultralight aircraft created and manufactured by Modern Wings. Swan is made of light composite materials that allow it a refined and smooth shape compared to older ultralight entries. The company, lead by Radu Berceanu, was formed in 2007 “with the goal of producing high quality ultralight aircraft at low costs.”

Radu and Modern Wings offer several varieties of Swan. One is a version with 115 kilogram (253 pound) empty weight which meets the requirements of the USA Part 103 regulation and those of Great Britain’s sub-microlight SSDR regulation.

Another version with 120 kg empty weight meets the requirements of Germany’s regulation.

“We ruled out all configurations that can be problematical for an inexperienced pilot,” said Radu, to include a pusher engine and a tailwheel landing gear model.

Swan 120 — when a gasoline-powered aircraft — is a high-wing ultralight that weighs 240 pounds empty when equipped with a Polini 250 engine (the sort often used on larger powered paraglider). 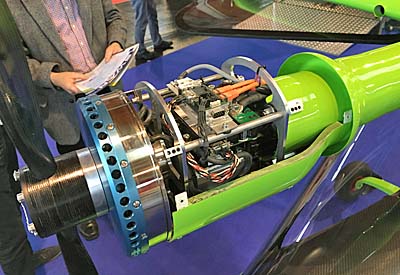 The Romanian company displayed a standard Polini-equipped aircraft at Aero 2017, but also had a Geiger-equipped alternative. This was still as a prototype, Roy clarified.

“The installation of the electric motor was very clean, with the boom-mounted powerplant located right where the typical gasser engine would be,” observed Roy. “The battery installation on this one is better than on some designs, which pack the batteries into the existing engine compartment.” Instead, batteries for Swan were mounted under the passenger seat, which no doubt improves the center of gravity and stability of the aircraft. It would also seem safer in the event of a poor landing or other mishap.

“Swan was just one example of electric power being offered, or soon to be offered right next to gasoline-powered aircraft at Aero 2017,” concluded Roy. Learn more about Swan at Modern Wings. To have direct contact, email Andrei Berceanu.