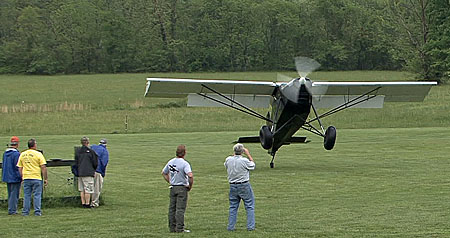 A one point touchdown is a particularly neat trick SuperSTOL can achieve thanks to slow touchdown speed and a shock-absorbing tailwheel gear leg. photo by Wayne Whitley 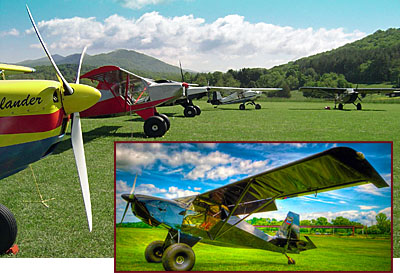 All Just Aircraft designs as seen in this photo have good bush flying capability. larger photo by Wes Whitley 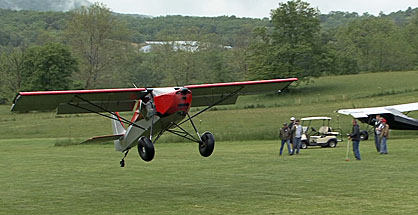 I cannot imagine any pilot turning away while a SuperSTOL performs either a take off or a landing. photo by Wayne Whitley

Airplane-brand-specific fly-in events can be fun and informative. If the folks at Just Aircraft are involved and if they show off their amazing SuperSTOL, a company fly-in takes on a new level of excitement. Those of you who have stopped by their airshow display to speak to the people from Just Aircraft know the Walhalla, South Carolina manufacturer is composed of a bunch of individuals that seem so laid back, you could wonder how they get so much work done. They do, by the way, having produced and delivered more than 500 aircraft kits. Since 2012 — when they introduced their at-the-time-unnamed SuperSTOL to slacked-jawed response from crowds — Just Aircraft reported kit sales have more than doubled requiring the company to add a second shift to keep up with demand. How many other companies do you know with that need? All seriousness aside for a weekend, though, those Just Aircraft’ers know how to have a good time, too. You might want to mark your calendar.

Yes, right now in the early days of July, aviation businesses and pilots from around the country are getting ready for that big summer celebration of flight called AirVenture. All eyes will be on Oshkosh, Wisconsin for the next few weeks — the show runs Monday July 28th to Sunday August 3rd. Following the event Just Aircraft will likely be counting fresh orders once they get back home to Walhalla, but they won’t have much spare time on their hands. Not even one month after AirVenture ends, Just Aircraft will sponsor Just Plane Fun Days on August 29 through August 31 (Labor Day weekend) at Brass Town Airport near the town of the same name in North Carolina*. Just Plane Fun Days is open to anyone and is free of charge. The event appeals significantly to people who own one of the Just Aircraft models but anyone who is considering their designs can attend, have a good time, and find out lots more from pilots who have built and fly the airplane plus speak to company officials. Just Aircraft officials expect that Highlanders and new SuperSTOLs will dominate the event and certainly the attention of the public.

Billy Payne owns the Brass Town airport and is hosting the event. He said it will be, “a gathering of like-minded people who enjoy flying their aircraft. At any given daylight hour there will usually be a dozen aircraft in the air, giving rides or participating in one of the competitions.” Those who attend can observe contests such as a short field take off, short field landing, spot landing, limbo (flying under a ribbon), balloon pop, coyote shoot (balloons) and bomb drop. These can be entertaining for any aircraft types, but when you see SuperSTOL attempt them, the game is different … and fascinating. All attending Just Aircraft models will be judged in a variety of categories: Best of Show, Best Panel, Most Innovative, People’s Choice, and Grand Champion. Saturday night will be the chance for a cookout at the airport and on Sunday morning pilots will take off for a tour of the local mountains. Last year organizers reported about 2,000 people visited, and even with bad weather 19 Just Aircraft flew in. This year, if blessed with good weather, Payne expects more than twice that number. Camping is available on the field and for those who prefer a motel, the group has a special rate at the local Hampton Inn. For more information phone Billy Payne at (828) 557-4833 or call Just Aircraft at (864) 718-0320.

* Brass Town hosts a festival that includes a contest with local men dressed as women to compete for the title “Miss Possum Queen.” Surely this refutes anyone who thinks Brass Townians aren’t out to have fun.