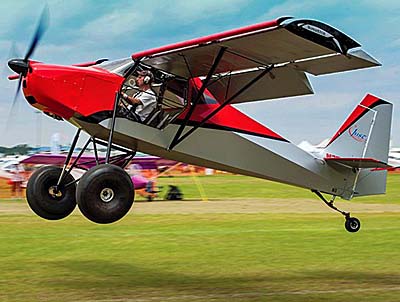 Troy Woodland blasts off an airshow strip using the Rotax 912 with 100 horsepower. 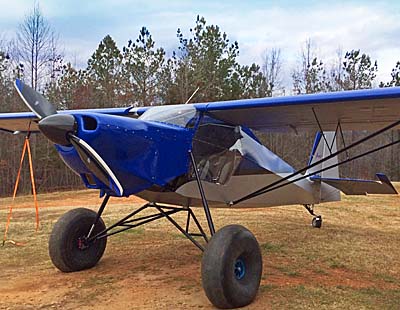 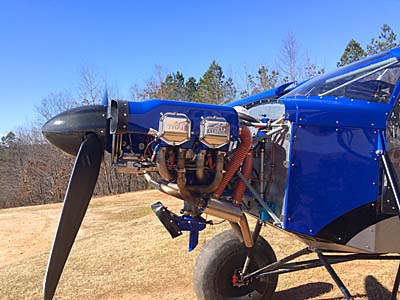 Even before Continental Motors took over the former ECi, that company’s Titan engine has been turning heads. CubCrafters was first to this party, installing the 180-horsepower engine on their Cubalike LSA, demonstrating very short takeoff rolls before climbing steeply. Since then, quite a few other producers have embraced the potent engine and more are coming. This development is sufficiently interesting that I am at work on an article about three “divisions” of powerplants for LSA, light kits, and ultralights.

However, all other users of the Titan are unlike Just Aircraft’s SuperSTOL, which itself has turned many a head at airshow demonstrations. SuperSTOL was able to rivet pilots’ attention when it performed with the 100-horsepower Rotax 912, so imagine the neck-snapping twists that will occur when people get a chance to see how this moveable-slats airplane on tall, telescoping gear performs with 180 horses doing the pulling.

The good news is, you don’t need to wait. You can get a relatively unique aft-facing, landing gear view of SuperSTOL rocketing off its factory airstrip at the end of this article. I’ll bet you enjoy that!

Just Aircraft reported they started flight tests with the Titan OX-340 engine on their stretched SuperSTOL XL. “Due to a redesigned crankshaft, the Titan develops 180 horsepower with elevated torque levels,” said James Ball, a principal of Engine Components, International or ECi. “Essentially, the engine started out as a 160 horsepower Lycoming, but ECi reconfigured the engine to have a larger displacement resulting in more power.”

In 2015, Continental Motors announced they expanded more deeply into the Experimental and LSA sectors with the purchase of ECi, a San Antonio, Texas-based manufacturer of FAA-approved engine parts. The deal provided Continental with a strong foothold in the light aircraft market with the ECi’s Titan line of engines including the X320, X340 and X370 models, all of which are based on Lycoming type designs.

While Continental already enjoyed a solid presence in LSA and light kits with their O-200 line, Titan adds a very powerful engine choice that satiates the desire of pilots for more thrust. It’s no small irony that one U.S. icon now offers engines based on another American engine icon, Lycoming. Full disclosure: Continental is owned by China’s AVIC.

Just Aircraft considers the Titan a good option for the SuperSTOL. “It’s premature to discuss performance numbers,” said XL designer Troy Woodland (seen in the lead photo doing what he does so well at airshows). However, Troy is quick to add, “But there clearly is an improvement in the takeoff roll and rate of climb. We brought our newest SuperSTOL to Sebring 2016 on a trailer to introduce the Titan and the response was very positive and enthusiastic. Since then, we’ve started flying it and we’re pleased with the results.”

As is often the case, Troy is being a bit laid-back and modest, as the video below testifies.

Sold as a complete kit for homebuilders, Just’s SuperSTOL XL offers “unparalleled performance in short takeoffs, landings and slow flight. Configured as a high wing, with two [side-by-side] seats and tundra tires, the XL can be set down in virtually any clearing.”

SuperSTOL was designed for back country flying and weekend adventures and Titan adds a new dimension to those “adventures.”

Want to see how enthusiastically SuperSTOL climbs behind the Titan XO-340? Then, watch this video. To add perspective, the runway at Just Aircraft is one of the most unusual I’ve ever seen … a very short, very, very steeply sloped runway, which in this video SuperSTOL barely uses, climbing amazingly fast away from the surface. Whoa!