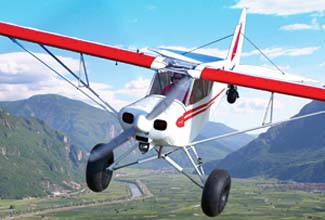 Not Super Cub but Cub-S … by Zlin 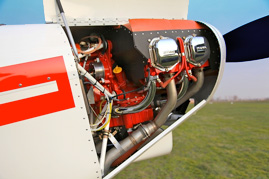 Cub-S can be equipped with 31-inch Alaskan Bushwheels and 6-inch extended landing gear.

The go-up-faster competition in Light-Sport aviation just got more boisterous. SportairUSA loves their S-planes and they just announced a new one: Cub-S. Why do I call them the S-planes people? How about this? They sell the Sting, Sirius, Savage, Snap, and now Cub-S with the Titan Stroker IO-340 engine producing a whopping 180 horsepower. The company is SportairUSA, U.S. distributor for aircraft manufactured by Zlin Aviation of the Czech Republic and they plan to showcase their new Cub-S at AirVenture 2013. “Look for the SportairUSA site at #295 Knapp Road, located just off of Celebration Way, between the Lycoming display and the EAA Welcome Center, said the company publicist. Here’s another company using Lycoming engines, a move we’ve increasingly seen in the last couple years, adding to Renegade, Arion Aircraft, and Tecnam.

“With its best-in-category power-to-empty weight ratio of 4.74 pounds per horsepower (7.33 pounds per horsepower even at MTOW), the Cub-S climbs at up to 2,100 fpm,” said Bill Canino of SportairUSA. He added that takeoff roll is 60 feet with one pilot or 81 feet fully loaded. Cruise speed is reported at 112 mph (97 knots) at 75% power, even when equipped with 31-inch Alaskan Bushwheels and 6-inch extended landing gear. “The Cub-S performs brilliantly in difficult, remote operations,” said Canino. “Cub-S is a fun, safe, robust and easy-to-fly airplane, suitable for weekend escapes or for expeditions into the bush. This is a lot of airplane for less than $125,000.” SportairUSA said the first two deliveries are scheduled for November of 2013.

Pasquale Russo of Zlin Aviation explained, “Now you have choices. You can chase the $100 hamburger or you can land on the highest mountain slope, reach the most isolated snow covered village, fly in to that secluded fishing spot or pristine beach to spend the day or camp for a week.” Zlin reported that Cub-S was the result of two years of study in the effort to build an LSA that optimizes off-runway operations. Cub-S tops the Zlin line, which also includes the Savage Bobber, Cub, iCub, Cruiser and Classic. Throttle up pilots, and see what two thousand feet per minutes feels like.