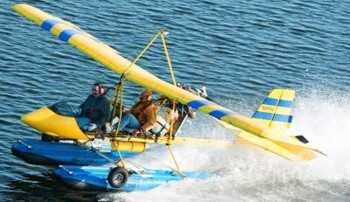 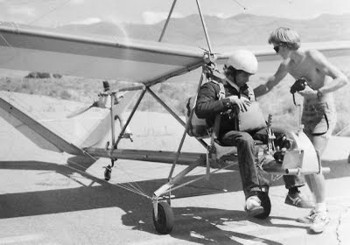 Lockwood Aircraft‘s Super Drifter open-cockpit kitbuilt plane, the resurrection of the Drifter design that was the basic concept for Phil Lockwood’s AirCam twin-engine airplane, (a unique camera platform first created for National Geographic), is getting a new set of tailfeathers. *** I first flew a Hummer ultralight, designed by Klaus Hill, back in the fall of 1980 at Crested Butte, CO. It belonged to hang gliding pal Gil Kinzie. *** We were in CB for a soaring contest and he let several of us fly it, though most of us had no general aviation training. Ah, those wild and wooly days of free flight. *** As such, the Drifter was one of the very first viable ultralights and presented a unique flying feel to its pilots: you sat out on the end of a long fuselage keel tube with everything – wings, motor, wheels – behind you! *** Once you got over the initial floating-in-space challenges to your comfort zone, you fell in love with the incredibly open, free feeling. *** But I digress. *** Lockwood Aircraft has brought back the beloved design as the Super Drifter, with an 81hp Rotax 912UL – which gives the 495 lb. (empty wgt.) bird a real kick in the pants! *** Specs and a blurb are here. *** The tail mod, due next March, has two feet more horizontal span to augment pitch stability and elevator authority for float-equipped models. Lots of folks fly Super Drifters on floats. *** Increasing the horsepower pops the Super Drifter off the water quickly and at low speeds, for shorter water takeoff runs. Low-power cruise makes for quiet flight, the power reserve is impressive and fuel efficiency is reputed to be super. The bird cruises between 55 and 75 mph. *** The new horizontal stabilizers will be available as a retrofit kit for existing float-equipped Super Drifters and standard on new kits going on floats, according to Lockwood’s go-to guy George Weber. *** If you like to bolt things together and have a spare $45K or so laying around, the Super Drifter is one great way to go for purely fun flight. *** —Super Drifter photo courtesy Lockwood Aircraft *** —Gil Kinzie photo courtesy John Coe