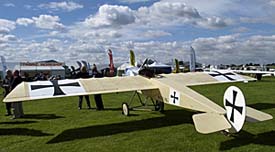 Aeropro EuroFox (Aerotrek in the USA) photo by Dave Unwin 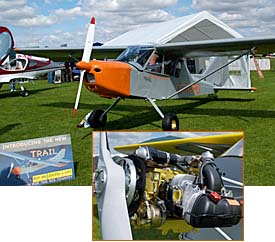 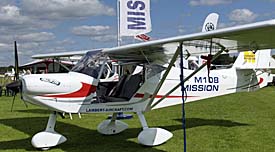 After an even grimmer British summer than usual — we’ve just experienced the “wettest drought” since records began; a dry spring followed by flooding rains — the weather Gods smiled benignly on the 2012 LAA Rally. The Rally is basically the UK’s version of Oshkosh (albeit several orders of magnitude smaller) and is run by the Light Aircraft Association, formerly the PFA or Popular Flying Association, which is the Limey equivalent of the EAA. The event has been staged at several different airfields over the years, and is currently held at Sywell in Northamptonshire.

Despite the parlous state of the economy, this year’s Rally had a real buzz, and it wasn’t just all the two-stroke engines. In spite of EASA’s best efforts it would seem that the lighter side of UK aviation continues to thrive. There were dozens of different engine and airframe manufacturers, plus lots of other types of traders, and the “aero-jumble.”

SSDR aircraft (roughly the British equivalent to America’s Part 103 —DJ) generated a lot of interest, and the Airbike, GSAL Eindecker and Reality Aircraft Kid all appeared attractive options for the cost-conscious fun-flyer.

I also saw plenty of interest in the EuroFox glider tug. I had witnessed a demonstration a few months previously, when a Eurofox (Americans know Aeropro as Aerotrek —DJ) proved what a capable tug it is by towing a Pilatus B-4. As an experienced tug pilot myself, I must say that the climb rate looked impressive.

It was interesting to see the partly-finished fuselage of a Groppo Trail, which was fitted with a Sauer S2200UL engine. This 85-hp air-cooled flat-four is based on the ubiquitous VW ‘Beetle’ engine, and is about half the price of an 80-hp 912S. The Trail is also an interesting machine in its own right. The folding wings should certainly help reduce hangarage costs.

The designer of the ‘Flitzer’ biplane, Lynn Williams, was at the show and delighted in showing me some very interesting drawings for several different aircraft, including a two-seat Flitzer and a scale replica of the Polikarpov I-16 “Rata.” Now fitted with the Rotax 912iS, the Belgium-designed Lambert 108 Mission also drew considerable interest.

I lucked out on the Sunday, when an old friend suddenly and unexpectedly found himself with two aircraft that needed to be flown home. The choices were an immaculately restored Auster, or a very nice Pioneer 300. As I’ve never flown an Auster I liked, I chose the Pioneer 300. This is a super little aircraft, from Italian airframer Alpi Aviation. Although its retractable undercarriage, constant-speed prop and 130 knot cruise speed preclude it from being registered in the US as an LSA, at only 560 kilograms (1,232 pounds) it is certainly light enough!

As the photos show, the weather really was most agreeable, which probably explains the 1,900 movements over the three days, with 865 on the Saturday alone. In conclusion, not the busiest LAA Rally I’ve ever attended, but still a great little show.