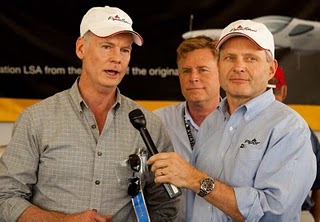 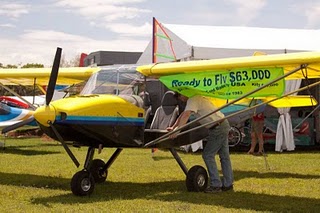 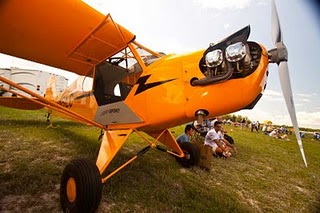 When the going gets tough, goes the old motivational phrase, the tough get going. *** The LSA industry had a hard year in 2009, as did all of General Aviation…not to mention the economy. *** And although news pops up here and there indicating better times are – eventually – coming, the most resilient companies keep looking for ways to stimulate their markets rather than simply holding on for better sales numbers. *** Cases in point from Day 1 of Sun ‘n Fun:  *** 1.  Piper Aircraft CEO Kevin J Gould addressed a morning press gathering to paint a thumbs-up picture for Piper and General Aviation as well.   He backed up his nuanced optimism with positive stats: Piper expects to sell 8 times as many trainers this year as last; Piper’s total sales are up 75% over 2009; enthusiasm for the PiperSport is strong – the company could produce and deliver as many as 75 PiperSports this year; sales of other models from its GA fleet are showing improvement; and the three new owners of the first PiperSports took delivery of their aircraft in a well-attended ceremony at the company’s flight line display. *** I like that last item for several reasons, but here’s my #1: Mr. Gould said in January that Piper would deliver its first PiperSports this month.  He kept his word.  We need examples just like this of leaders who talk the talk – then walk it. *** —- > Piper CEO Kevin Gould (r) and new PiperSport owners *** 2. Flight Design CEO Matthias Betsch, and FD USA Prez Tom Peghiny and Marketing head John Gilmore talked about several new developments in existing and new products: *** the CTLS Lite, the all-metal MC S-LSA (look for my flight report in the next issue of Plane & Pilot),  the new CT HL tow aircraft for Europe, where noise pollution is a real problem; ongoing development of the after-market GA hybrid engine, currently pegged at $34,000 and expected to fly this year; an all-hand control system for disabled pilots, now certified in Germany, which will be an easy – and then reversible – retrofit for any CT; and floats under development for the CT line. *** Mr. Betsch also reiterated what he told me at Sebring in January: that the market “is starting back” and 2011 should be considerably stronger than 2010. *** He also made a cogent point: “There is no aviation without basic aviation.”  Makes sense, ja? *** 3. American Legend announced a new model today: the Classic J3, which is exactly what it sounds like: the original sport plane of them all, without any frills, and at a price, for an all-American made airplane, that should attract some solid interest: $94,895.  More on that later, I’m running out of room *** 4. Randy Schlitter of Rans Aircraft told me he’s holding the line on the Coyote II, aka S-6ELS, at $63,000.  That’s another attractive, all-American airplane that’s about half the price of many S-LSA. *** Randy also shared some insider info on his development of an all-electric aircraft: more on that later too. *** As I said at the top: when the going gets tough, etc.  These four market leaders aren’t waiting for the turnaround: they’re helping make it happen.