Blue Angels seen on the Lakeland ramp at the occasion of the AutoGyro party. The jet team’s flawless performance accented the light side of Sun ‘n Fun.

John “Lites” Leenhouts announced to a largest-ever gathering of volunteers that the event had set all-time records for attendance at the 2017. Clearly pumped by the positive results, Lites made his way around the small army expressing himself like the gracious professional he is.

How good was attendance? “They completely ran out of weekly armbands and had to resort to some 2016 armbands or daily ones,” said longtime reporter and co-star of Uncontrolled Airspace Dave Higdon, who has regularly attended Sun ‘n Fun since the early 1980s. We discussed the event and its evolution to become a major worldwide aviation show as Dave and I also celebrated 40 years since my hang gliding school taught him how to fly (we were mighty young in those days, I rush to add). 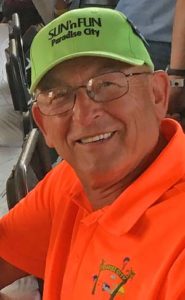 A few years ago, Paradise City volunteer and former airline captain George Karamitis was awarded a 50 year safe flying award from FAA. He flies his Quicksilver nearly every day, often posting to Facebook.

Ben Sclair, publisher of the airshow newspaper, “Sun ‘n Fun Today,” and General Aviation News backed up the assertion of very strong results for 2017 Sun ‘n Fun, saying that not only did his paper have a full slate of advertisers but he’d personally seen solid traffic everywhere he went tracking down stories for the daily to report.

Gary Fredell, chairman of Paradise City also reported equally strong numbers for his area. Exhibitors are more than double four years ago and nearly 2,000 flight operations happened —safety! — on the Paradise City runway that is now a year-’round airstrip used daily by the Central Florida Aerospace Academy and its Lakeland Aero Club that provides flight instruction to students.

Lakeland’s weather was mostly cooperative, having higher winds on a few days as a front passed producing a couple days of cool temperatures before rebounding into near-perfect low 80s (28° C).

From the perspective of the LAMA Show Center tent and LSA Mall supported by Aviators Hot Line, the light aviation sector appeared upbeat and healthy. New projects were announced. Companies said business was healthy. Almost no one talked about BasicMed and its impact on Light-Sport Aircraft sales showing that this potential holdback is proving to be a non-event from an aircraft sales perspective. In several conversations on this subject more often than not customers said they think LSA sellers ought to continue to emphasize the medical freedoms inherent in the Sport Pilot rule. 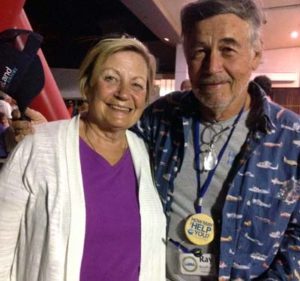 Randee Laskewitz and Ray Bradford are the heart and soul of the LAMA LSA Mall and Engine Display. Without these two, those central parts of Paradise could not function. As the LSA Mall celebrated its 10th year, Randee and Ray were awarded their 10-year volunteers pins in 2017.

Another fascinating — and continuing — development is steady interest in genuine Part 103 aircraft or more back-to-basic flying. Everyone enjoys the sleek LSA that offer high-tech panels, autopilots, high cruise speeds or specialty STOL performance or LSA seaplanes and more, but grassroots aviation appears to be staging a comeback paralleling the way Paradise City is bouncing back from low points a few years back when the economy was in tough shape.

Videoman Dave and I shot perhaps 30 to 40 new videos that will go live as additional footage is sourced and the time-consuming task of editing is complete. Until they start to come online, I will have more stories about light aircraft from Sun ‘n Fun and Aero. To complete the flavor of Sun ‘n Fun’s Paradise City show-within-a-show, check out Randee Laskewitz‘s flight line tour below.