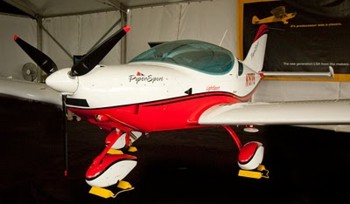 Chatting tonight with Piper’s Chief Pilot Bart Jones as the fifth day of the six day airshow wound down, as our conversation drifted to our favorite LSA, I asked him, “Do you have any idea what kind of business Piper’s done?” *** I figured he wouldn’t have much to say on the topic as these are usually internal affairs, with the timing of info releases usually left to PR depts. *** So I was happily surprised (since we’d both agreed moments before that PiperSport was a mutual favorite) to hear him say, “Well, you know what?  We’ve sold seven PiperSports so far!” *** My eyes must have widened a bit because he added, “and get this: that’s without doing any demo flights!  We had a paperwork snafu, so we couldn’t even fly potential customers.” *** Looks like my prognostications and those of other industry watchers was right on: Piper’s impact on the LSA market could indeed be huge. *** By the way, Bart is no company mouthpiece but a straight-up, sincere guy I’ve known for many years.  He flies all the most systems-intensive heavy iron for Piper — but confesses to enjoying the PiperSport as much as anything he sits left seat in.  *** So when he says Piper has sold 7 of its new S-LSA, you can believe it.  “And we’ve still got one day of the show left,” he added. *** Making the rounds of the exhibition buildings, Phil Lockwood, aka Mr. Rotax, his lovely wife Tish and gal Friday Rafaela (I never remember her exact title but it seems she does a lot of just about everything at Lockwood Aviation Supply) all said they’d been crazy busy selling all kinds of Rotax hardware for the first four days of the show — when the buying public generally comes. *** Airshow watchers and the more generally interested aviation enthusiasts tend to come out on the weekends. *** Meanwhile, those enterprising dudes I reported on a couple weeks ago over at Light Sport Group unleashed its Contour HD A/V-ator Edition High Def aviation camcorder on an unsuspecting public and promptly sold out all their inventory…and have three units backordered!  *** It’s a cool unit, great for recording student pilot training videos but that monster-strong suction cup they have on that thing would, to paraphrase Willie Nelson, suck the anodizing off an aluminum wing.  That is, you can mount it on a reasonably flat surface on the exterior of the airplane and get in-air shots of… yerself!