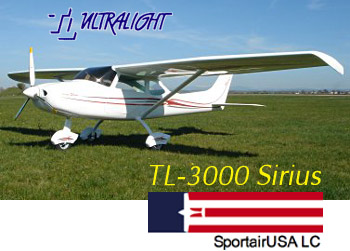 The fourth best selling LSA model is the StingSport sold in America through SportairUSA. Early next year, the TL-3000 Sirius should start arriving in the U.S. At the German Aero show, the Czech producer debuted this new high wing LSA.

Talk about your transatlantic jet set…a number of exhibitors attended the first few days of Sun ‘n Fun and then blasted off for the south of Germany, to Aero — an every-other-year airshow that has become a focus for light-sport airplanes. EAA Sport Pilot editor, Mary Jones posted news including, “To the delight of most European manufacturers, Alain Leroy, who heads certification in the safety branch of [European authority] EASA, committed to the release of a notice of proposed amendment (similar to a U.S. NPRM) by June of 2007 that would outline rules under which a new light-sport aircraft category might operate.” Leroy had said earlier at Aero that EASA was also looking to the ASTM standards as the certification method for a European LSA. *** A major aircraft announcement was the new high wing design from TL Ultralight, manufacturer of the StingSport sold by SportairUSA. TL introduced their TL-3000 Sirius adding that they hoped to start production by January 2008.