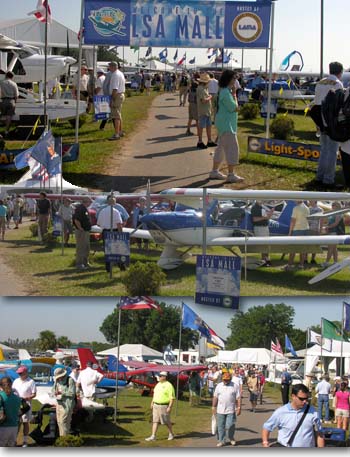 LSA Mall Hosted by LAMA — Traffic in the LSA Mall was dense every morning, even though confusion was evident regarding entry gate locations thanks to a new 8-foot-high chain link fence erected by TSA. Nineteen aircraft models were on display including many industry leaders and some new introductions.

REPORTING FROM SUN ‘N FUN — Early estimates from Sun ‘n Fun show total attendance down just slightly (between 5 and 10%) compared to April 2008. A year ago, sub-prime loans were the concern and few knew how difficult the following year would be. Measured by exhibitors, Sun ‘n Fun was also off last year’s all-time record of 522 but only by 4%. The best news included no serious accidents though a SportCruiser ran off the end of the Light Plane Area’s 1,400-foot runway. *** From my view in the LSA Mall positioned right at the main gate, crowds were especially thick on Thursday, Friday, and Saturday while serious buyers arrived early on Tuesday and Wednesday (following a common airshow routine evident the last few years). Airplane shoppers were plentiful though sales reports were uneven. Some, like Flight Design, FPNA, and Evektor, reported sales transacted in the first days of the show. Leads, the real currency on the airshow circuit, were substantial according to staff from Remos, Jabiru, Sting, Gobosh, IndUS, and Aerotrek. Newcomers (Paradise, SeaRey, SeaMax) and low price leaders (Apollo Fox and X-Air) reported success discovering customers in the Mall. *** In a recession, how can we account for the upbeat action? My theory is that LSA are showing market maturity (increasing brand familiarity) and their low costs — when comparing new LSA prices to new GA aircraft — are helping producers and importers find new customers in the midst of, perhaps because of, the economic downturn. One particular strength many sellers report: flight schools are expressing rising interest.