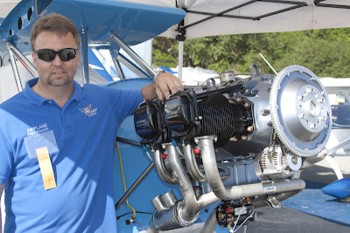 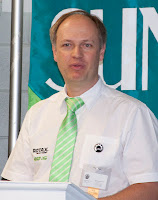 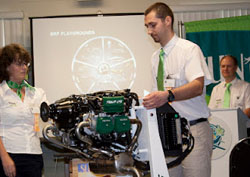 The 912 iS was wheeled in with great fanfare under a shroud to accompanying, powerful classical music of the Russian persuasion… all the world’s a stage. It is a beautiful engine to be sure. 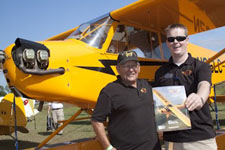 Dave Graham, right, shows off the magazine he created to show off Legend’s fine Cub line. He credits Randy Schlitter of Rans Aircraft, who did the same for his line of SLSA and kits, with the idea. Both have done superb jobs, and it’s fun to read about an airplane in so much detail. Great idea guys! That snazzy AmphibCub behind Dave belongs to the happy owner Frank (L). 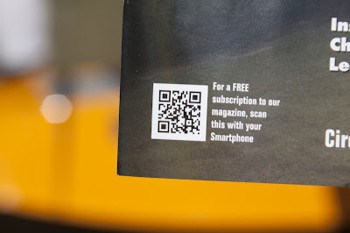 Here’s the scan code so you can get your own free copy with a smartphone and bar code reader.

Sun ‘n Fun got off to a great start with weather in the low 80’s, a helpful breeze and lots of new buildings and of course massive traffic jams coming in to the show because some things should never change no matter how many improvements are made. *** Seriously, the Sun ‘n Fun folks do a great job and there are many new things on the field to make life more enjoyable for spectators and those of us here to work.First up: Jim Dehart of Atlanta Light Sport Aviation was excited to show off his school’s new FK12 Comet with the first-in-US Lycoming IO-233 fully aerobatic light sport engine. *** “The airplane is really powerful,” Jim says, “and at 696 lbs. will be a real performer.” *** He quotes the horsepower at 125 hp but I’ve seen it at 116 max everywhere else so either I’ve got it wrong and there’s a bump in power from the inverted fuel/oil system on the aerobatic version (standard carburetted version also available, as well as a Rotax version, or he meant to say 116 hp. *** At any rate, the starting price for the fully aerobatic Comet is $135K ($130K for normally aspirated mill). *** “This will create a new category of competition airplane in the IAC,” he says. IAC is the International Aerobatic Club, the governing body for sanctioned aerobatic events. *** Jim says flight test will commence on the Comet in the middle to the end of next month, and he hopes, though it’s a stretch, to enter the first aerobatic competition by July. *** “We will try to have the first Light Sport aerobatic school in the country too. Our regular LSA flight school signed up more than 36 students last year and we’ve put 22 through to their license so far, and have 32 renters of LSA currently.”Next up was a morning of press conferences including a dramatic wheel in of the new Rotax 912 iS which I’ve got a ton of notes on but once again, hotel wifi problems have caused undue stress and strain on your erstwhile blogster, plus it’s late and I’m tired from a long day so I’ll let pix suffice for now and will fill in with details down the road.<