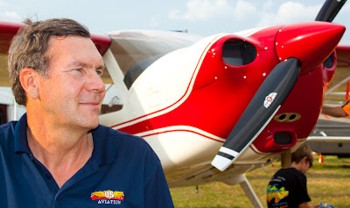 I caught up with a fellow hang glider pioneer from the 70s’, Scott Severen of U.S. Aviation, Denton, TX who filled me in on the latest events for his broad-based Light Sport/GA service and repair center. *** U.S. Aviation is a large, well-established aviation service center that does it all: flight training, aircraft and avionics sales, service and maintenance (for general aviation as well as LSA). *** Scott has been involved with Indus Aviation and its Thorpedo LSA aircraft for years. That project is moving to a China-based manufacturing base and “It’s a big process to pull it all together,” he says. He was just over there, assembling a couple Thorpedos to support the transition. *** “It will be a beautiful facility over there once it’s built. We’ll still do parts and aircraft sales in Dallas, and US Aviation will assist in factory support of the Thorpedo; it’s one of several LSA we do. *** U.S. Aviation’s vision for the LSA side of their operation “is to create a centrally located, national in scope factory authorized service center for as many LSA manufacturers as we can gather.” *** “We’ve been successful at that: we just became the Flight Design service center for our area, but anyone can come to us, say if they’re flying through and have an issue, and we can give them factory authorized support right there in Texas. We’re real proud to have Flight Design, there’s a lot of CT’s flying in our area and it’s a great airplane.” *** “We also just picked up Evektor and are excited about that relationship too.” *** U.S. Aviation also lists Jabiru, Tecnam, Remos, Allegro, SportAir, Aerotrek and others in their service stable. *** “If you don’t include the Cub LSA aircraft, we’re now authorized to service more than 92% of all Light Sports!” *** (Scott has talked with the Legend Cub guys.”But the factory is only 35 miles away!”) *** Becoming an authorized service center is no casual affair. *** “We have to prove ourselves with each client first. It took quite awhile with Flight Design: there was training to do to really get to know the product before we got the factory stamp of approval. Companies either come to us for training, or we send our people to them.” *** “We’ve also got a Part 145 avionics repair shop so we have a high degree of competency for installing and servicing avionics. We’re dealers or representatives for Dynon, Garmin, Zaon, Aspen, Avidyne, all the major Light Sport names and many of the General Aviation names too.” *** The FBO is a Dynon SkyView center too for the central U.S. and has already been through that training. *** “We already have a SkyView demo so people can come play with it.”