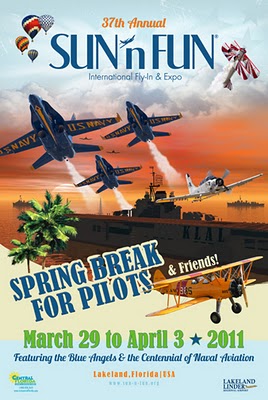 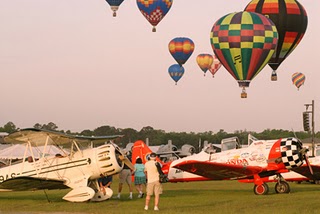 Sun ‘n Fun 2011 kicks off, even as scores of planes — yours truly included — remain scattered around at airports up to hundreds of miles away, trying to beat the storm system that’s prevented them from making it to Lakeland, Florida so far. *** The big airshow’s big boss, John Burton, promises an impressive line up: • Blue Angels performances four different days; highlighting the celebration of the 100th anniversary of naval aviation; • a 20-year retrospective on Desert Storm; • a 10-year commemoration of September 11, 2001; • the formal opening of the new Central Florida Aerospace Academy (CFAA) on the Sun ’n Fun campus; • F-22 Raptor flight three different days; • AvBid Airplane Auctions; • Hot air balloon launch at dawn on Saturday, April 2; • Daily and nightly airshows with fireworks; • AOPA “Rally GA” Day; • Lindbergh Foundation Awards for electric-powered flight advances; • “Green Space” exhibit of environmentally friendly, aviation-related products and services, anchored by Lindbergh Foundation; • 75th Anniversary Cub Convoy mass arrival to Sun ’n Fun on Monday, March 28. *** And, of course, Sun ‘n Fun will have all the mix of colorful booths, new aircraft (including the LSA Mall, filled to capacity once again), and a whole lot more.Be there or be square! *** Speaking of square, I may have to pull the plug, rent a car and drive the last 500 miles from Sparta, TN… but I’m hanging in until the last minute because it would sure feel a lot better to land in the same Dakota Cub in which I started this flight.