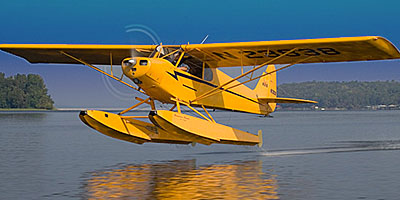 When summer rolls around and the sweat rolls off, it’s a perfect time to think about float flying. In the Light-Sport Aircraft or light kit-built airplane space, you are lucky to have a broad number of choices. This includes seaplanes (with boat hulls), floatplanes (land planes equipped with floats) or either of those on aircraft such as weight-shift trikes.

Legend Cub is a modernized version of the old Piper Cub. Sulphur Springs, Texas-based Legend was an early entrant to the LSA world. They’ve done well enough under the leadership of Darin Hart to occupy the #5 spot on our all-time-fleet ranking of Special LSA; they are one of only five LSA producers with more than 200 aircraft registered with FAA.

American Legend flew a float-equipped Legend Cub way back on March 11, 2005 even before the first Special LSA were accepted by FAA. 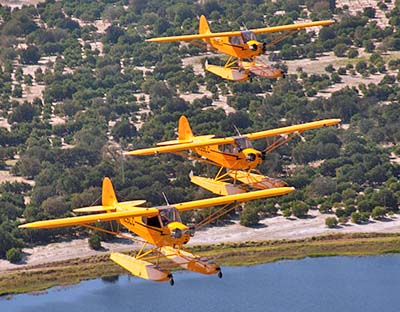 Legend’s floatplane offering boasts advantages. “It weighs less than comparable aircraft, cost less, and came with the added advantage of doors and windows on both sides of the cockpit,” observed the company. This design feature — not present on the original Piper models — is especially appropriate for float-equipped aircraft, offering egress from either side while docking.

Legend FloatCub comes standard with dual entry doors and windows, dual wing tanks, a larger cabin, and electric start (also not on Piper’s iconic original). “You have a choice of engines, including the 100-horsepower Continental O-200-D — the lightened one made expressly for LSA — or a 115-horsepower Lycoming YO-233. “Each provides plentiful power for serious seaplane pilots,” reported Legend.

Although popular with customers, many of the Cubalikes face weight challenges. Legend has worked to trim weight in numerous ways. “We’re obsessed with shedding weight,” said Legend, “but it’s not easily done.” On light aircraft weight is generally reduced by ounces not pounds. 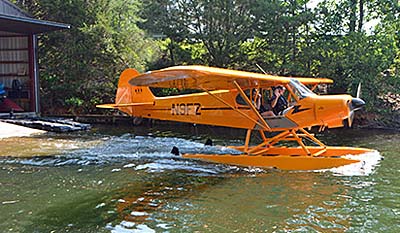 Who wouldn’t love the idea of taxiing down the ramp right out of your hangar and into the water like this owner can.

“With useful load maximized on Legend Cub designs, Carbon Fiber Floats are available for all current models,” noted Legend, “including our open cowled AL3 and the Lycoming or Titan-equipped Super Legend AL18.” Net weight gain on a Legend Cub with amphibious LF1500A floats is minimal due to a 75-pound reduction from removing the wheeled landing gear, the company added. This adds to the 110 extra pounds allowed for a LSA seaplane. Nonetheless, “Making an amphibious LSA was a challenge. The target weight for the floats was 240 pounds or less. The weight of our floats came in at 235 pounds.”

By June 2015, American Legend announced its own Carbon Fiber Floats. “Our floats offer superb strength, and are optimized for performance with our factory-built Legend Cubs as well as kit-built aircraft,” said Legend. “Floats have to support at least 90% of the aircraft’s weight to be approved by the FAA. We went beyond that. The aircraft weighs 1,430 pounds. We stress tested the floats to a 1,600 pound load.” 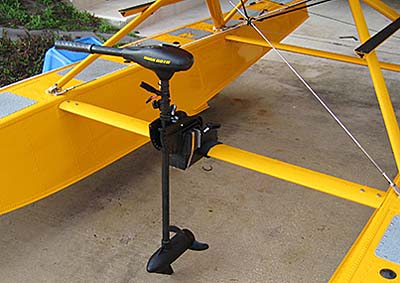 Add a trolling motor to Legend’s floatplane like another owner did and you can make a fishing platform out of Legend AmphibCub.

According to various reports including my own experience, a Legend Cub equipped with Legend Floats still feels much like the wheel-equipped model in flight. “The floats are aerodynamically smooth, providing some lift and negating any drag or weight concerns,” boasted Legend.

Jim Lawrence, who used to write for this website among other publications did a pilot report published in Plane & Pilot magazine’s September 2011 issue. Here’s what he had to offer:

“Flying the AmphibCub is pretty much like flying a Cub. The control inputs require firmness, and response in pitch and roll are smooth and steady.

“Water operations are deceptively easy, though training in all aspects of water operations is not only legally required but important. Flare is smooth and easy, and it’s back with the stick, back more, and settles like a seabird. [Once settled into the water], haul the stick all the way back to avoid nosing over. We decelerate, come off the step, and we’re water-taxiing.

“Boating along at higher, on-the-step speeds over roughish chop feels completely secure, though we’re only steering with the main rudder. Customers who fly the heavy iron rediscover the simple joys of flying in a Cub. It’s more fun than anybody should be allowed to have.”

Catch a couple video on Legend Floats here, first a pilot report and then an interview with Darin Hart regarding the development of their own amphibious system. Enjoy!